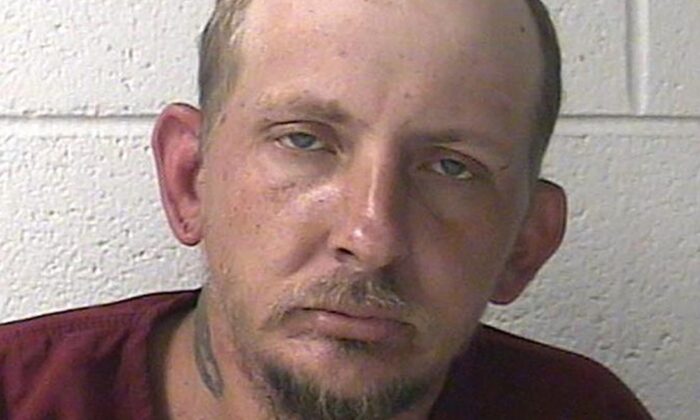 A man who has the same name as rapper Tupac Shakur was arrested in Tennessee after allegedly threatening police with a knife.

The suspect, Tupac A. Shakur, 40, was also charged with possession of methamphetamine and aggravated assault, said the Johnson City Police Department in a news release on Oct. 19.

“As they arrived, officers observed a vehicle leaving with the suspect inside. The vehicle was later located 1908 E Unaka Ave. and contact was made with Tupac Shakur who was sitting in the passenger seat,” the release stated.

When police officers tried to place him in custody, Shakur reached toward his waistband, officials said.

That’s when “Shakur then attempted to turn towards officers with a knife in his hand before being taken to the ground. After a brief struggle, Mr. Shakur was placed in custody. Mr. Shakur was in possession of a syringe and multiple baggies of methamphetamine,” the news release said.

Shakur was then taken to the Washington County Detention Center where he is being held in lieu of an $18,000 bond.

He is slated to appear in court on Monday. It’s not clear if he has an attorney.

Shakur shares the same name as well as the middle initial of the slain rapper, who was killed in September 1996 at the age of 25.

It wasn’t disclosed why he and the rapper share the same name.

There have also been conspiracy theories that the “Dear Mama” rapper is still alive.

Facts About Crime in the United States

Violent crime in the United States has fallen sharply over the past 25 years, according to both the FBI’s Uniform Crime Reports (UCR) and the Bureau of Justice Statistics (BJS) National Crime Victimization Survey (NCVS) (pdf).

The rate of violent crimes fell by 49 percent between 1993 and 2017, according to the FBI’s UCR, which only reflects crimes reported to the police.

The violent crime rate dropped by 74 percent between 1993 and 2017, according to the BJS’s NCVS, which takes into account both crimes that have been reported to the police and those that have not.

The FBI recently released preliminary data for 2018. According to the Preliminary Semiannual Uniform Crime Report, January to June 2018, violent crime rates in the United States dropped by 4.3 percent compared to the same six-month period in 2017.

While the overall rate of violent crime has seen a steady downward drop since its peak in the 1990s, there have been several upticks that bucked the trend. Between 2014 and 2016, the murder rate increased by more than 20 percent, to 5.4 per 100,000 residents, from 4.4, according to an Epoch Times analysis of FBI data. The last two-year period that the rate soared so quickly was between 1966 and 1968.