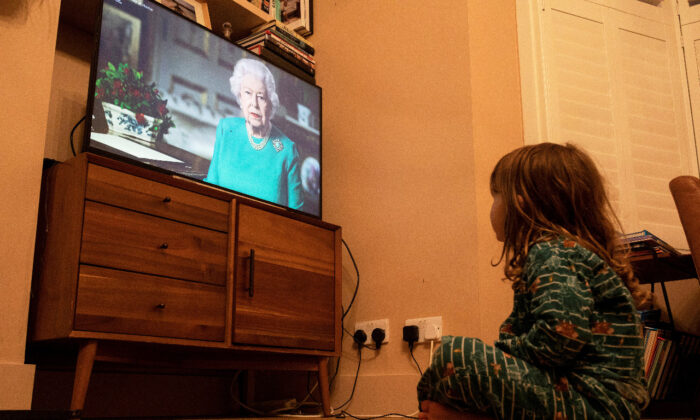 Britons spent 40 percent of their waking day watching TV and online videos at the height of the CCP virus lockdown in April, including spending twice as long watching streaming services such as Netflix, Disney+, and Amazon Prime Video, regulator Ofcom said on Wednesday.

Adults, who were advised by the government in late March to stay at home, spent on average six hours and 25 minutes a day watching news and entertainment, Ofcom said, a rise of almost a third on the same month a year ago.

Prime Minister Boris Johnson’s announcement on May 10 that lockdown measures would be eased was the most watched programme of the year so far, with 18.7 million viewers, while the imposition of lockdown on March 23 was second with 14.6 million.

Queen Elizabeth’s broadcast to the nation had 14 million viewers.

When they were not watching news and information about the CCP (Chinese Communist Party) virus, Britons increasingly turned to video streaming services for entertainment.

An estimated 12 million adults signed up to a new streaming service in the first weeks of lockdown, of whom 3 million had never subscribed to one before, Ofcom said.

Disney+, which was launched by the U.S. entertainment group in Britain on the first day of lockdown, made an immediate impact, attracting 16 percent of online adult viewers by early July to become the third-ranked service behind Netflix, which had 45 percent, and Amazon Prime Video, with 39 percent.

“Every hour of TV viewed after the age of 25 reduces the viewer’s life expectancy by 21.8 minutes,” write researchers Hyunjae Daniel Shin and Amid Al-Habaibeh of Nottingham Trent University in a June article on The Conversation.

Shin, a senior lecturer in product design, and Al-Habaibeh, a professor of intelligent engineering systems, were both particularly concerned by an increase in children’s screen time during lockdown, some of it unavoidable due to school work being set online while schools were closed.

Before the pandemic, together with researchers from Cardiff Metropolitan University, Shin and Al-Habaibeh highlighted the negative effects on family health of the sedentary lifestyle associated with too much screen time.

The key role parents play in limiting screen time for children was examined in the research, published in the journal Global Pediatric Health in September last year.

However, parents interviewed for the study were “unaware that these [screen time] behaviours could have a multitude of long-term health implications for their children, mainly because they (parents) spend a substantial amount of time on these devices themselves.”

Lockdown has made matters worse for parents and children, according to Shin and Al-Habaibeh.

“The pandemic has made it particularly difficult to encourage children, particularly teenagers, to switch off devices and exercise away from their friends,” they wrote in The Conversation.

Physical activity has also reduced for children who normally benefit from the basic level of exercise involved in walking to and from school, playing in the park, and going shopping.

“This has put a huge burden on parents, but they are also struggling to set a good example for the same reasons,” the researchers wrote.

Shin and Al-Habaibeh suggest that parents use a wall chart and a points system where youngsters can “buy” screen time with exercise to help mitigate the potential damage inactivity can do to their children’s health.

Five to 7-year-olds should do a minimum of an hour a day moderate to vigorous exercise daily, they said.