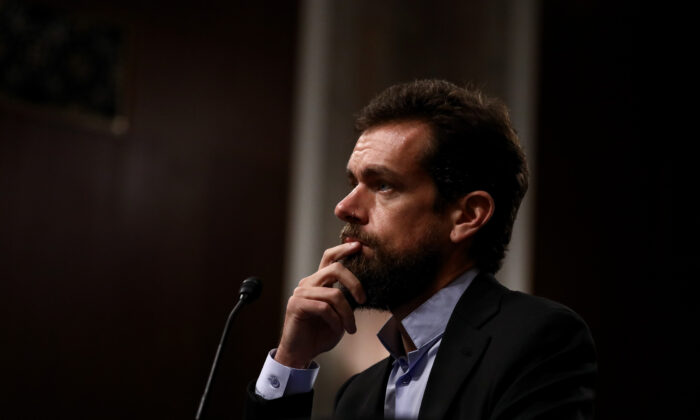 Jack Dorsey, CEO of Twitter Inc., testifies at a hearing to examine foreign influence operations' use of social media platforms before the Intelligence Committee at the Capitol in Washington on Sept. 5, 2018. (Samira Bouaou/The Epoch Times)
Updated: 2019-11-11 09:50:16

Twitter has suspended or forced users to delete tweets naming the alleged whistleblower despite stating it is not company policy to do so.

Several Twitter users said their accounts were suspended for tweeting out the name. One said Twitter later messaged him saying the suspension was “an error.”

A Twitter spokeswoman told Breitbart: “Per the private information policy, any Tweets that include personally identifiable information about any individual, including the alleged whistleblower, would be in violation of the Twitter Rules.”

The spokeswoman said posting the name of the person isn’t against the rules.

Screenshots from a number of users confirm they were suspended for tweets they posted that included the name.

Twitter said it was probing what happened in those cases.

Many other accounts that have tweeted out the name have not been suspended.

In a statement on Nov. 8, Facebook said that “any mention of the potential whistleblower’s name violates our coordinating harm policy, which prohibits content ‘outing of witness, informant, or activist.’”

It added, “We are removing any and all mentions of the potential whistleblower’s name and will revisit this decision should their name be widely published in the media or used by public figures in debate.”

A YouTube spokesperson told CNN that videos mentioning the name of the alleged whistleblower would be removed; the company would be using machine learning and human reviewers to find and remove the content.

Independent journalist Tim Pool mentioned the name in an Oct. 31 video that racked up nearly 300,000 views before being blocked through a manual review.

“Welcome to the dystopian nightmare, where big tech is colluding to censor newsworthy and public information,” he wrote.

A number of media figures and companies, including HuffPost contributor Yashar Ali, RealClearPolitics, and Breitbart have circulated the name of the alleged whistleblower. The name has not been confirmed.

Republicans have pushed for the whistleblower to testify before Congress about the complaint House Democrats filed against President Donald Trump, while some congressmen have said the person should be identified publicly so their political bias is made clear.