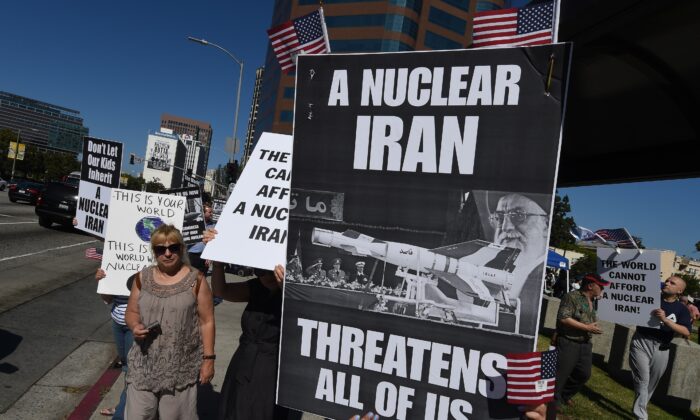 Members of the 'Stand With Us' group hold a rally calling for the rejection of the proposed Iran nuclear deal outside the Federal Building in Los Angeles, on July 26, 2015. (Mark Ralston/AFP via Getty Images)

The leaders of the United Kingdom, Germany, and France said they will stand by the 2015 Iran nuclear deal and have called on Tehran to fully comply in the wake of back-and-forth strikes between Iran and the United States.

“Despite increasingly difficult circumstances, we have worked hard to preserve the agreement,” the leaders said in a joint statement, noting that the United States pulled out of the agreement and placed more sanctions on the regime.

“It is essential that Iran return to full compliance with its commitments under the agreement. We have expressed our deep concern at the actions taken by Iran in violation of its commitments since July 2019. These actions must be reversed. We reserve recourse to all the provisions of the Joint Comprehensive Plan of Action (JCPoA) to preserve it and to resolve the issues related to Iran’s implementation of its JCPoA commitments within its framework,” the statement read.

Their statement comes after Iran said it would scale back its commitments under the nuclear deal following the U.S. airstrike to kill Iranian general Qassem Soleimani earlier in January. Amid heightened tensions, Iran fired a barrage of missiles at two Iraqi airbases with American soldiers, injuring no one, before downing a Ukrainian International Airlines plane, leaving 176 people dead.

President Donald Trump and his administration have argued that the 2015 nuclear deal, in which Iran was supposed to curb its nuclear program in exchange for sanctions relief, gave the regime more financing and ability to increase terrorism in the Middle East. Trump and Secretary of State Mike Pompeo both said Soleimani was planning imminent attacks on U.S. assets in the region before his death was ordered.

“We must address—through diplomacy and in a meaningful way—shared concerns about Iran’s destabilizing regional activities, including those linked to its missile programme,” the European leaders’ statement said.

But on Jan. 10, the Pompeo and Treasury Secretary Steven Mnuchin announced a bevy of new sanctions on eight Iranian officials and Iran’s manufacturing sector.

“Today’s sanctions are part of our commitment to stop the Iranian regime’s global terrorist activities,” the White House said in announcing the new sanctions, adding that they would continue “until the regime stops the funding of global terrorism and commits to never having nuclear weapons.”

Volkswagen Pleads Guilty to All Canadian Charges in Emissions-Cheating Scandal

Iranian Commander Shot and Killed in Front of His Own Home: State Media

With a Nod From Parliament, Greece Gets First Female President

Why Guaido’s Camp Has Been Unable to Unseat Maduro