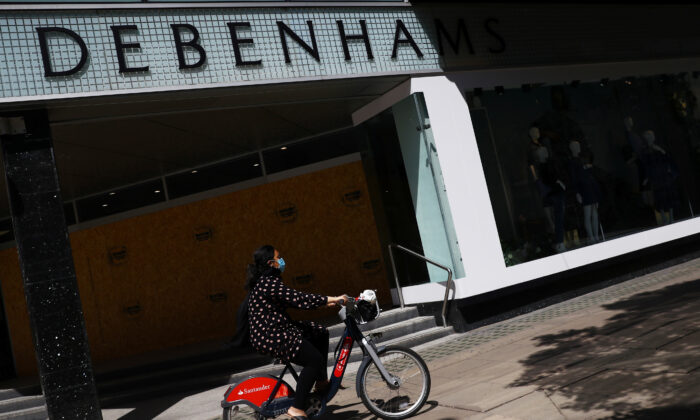 LONDON—Struggling British department store chain Debenhams is to cut a further 2,500 jobs, dealing the latest blow to the country’s battered retail sector from the COVID-19 crisis.

Debenhams shed hundreds of head office jobs in May and its latest round of redundancies adds to thousands already announced by major British retailers, including Marks & Spencer, Boots, John Lewis and WH Smith.

Official data, also published on Tuesday, showed the number of people in work in Britain has suffered the biggest drop since 2009 and signs are growing that the coronavirus will take a heavier toll on the labour market as the government winds down its huge job-protection scheme.

“We have successfully reopened 124 stores, post-lockdown, and these are currently trading ahead of management expectations,” Debenhams said in a statement.

“At the same time, the trading environment is clearly a long way from returning to normal and we have to ensure our store costs are aligned with realistic expectations.”

It said it would take “all necessary steps” to give Debenhams every chance of a viable future.

In April, Debenhams went into administration for the second time in a year, seeking to protect itself from legal action by creditors during the crisis that could have pushed it into liquidation. The retailer is owned by a lenders’ consortium called Celine UK NewCo 1 Ltd that includes U.S. hedge fund Silver Point Capital.

Last month Debenhams, assisted by investment bank Lazards, started a process to assess ways for the business to exit administration.

It said there were a range of possible outcomes, including the current owners retaining the business, new joint venture arrangements with existing and new investors or a sale to a third party.

That process is due to run until the end of next month.

Debenhams’ latest job cuts were first reported by The Sun.