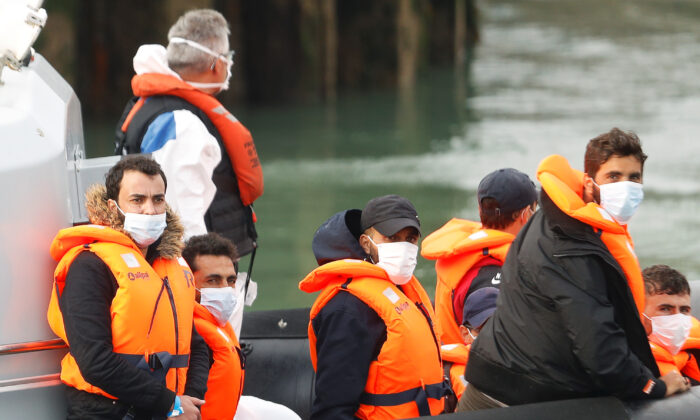 The British government said on Tuesday it wanted greater flexibility to return illegal immigrants back to France after a surge in the number of people embarking on the perilous journey across the English Channel.

Hundreds of people, including some children, have been caught crossing to southern England from makeshift camps in northern France since Thursday—many navigating one of the world’s busiest shipping routes in overloaded rubber dinghies.

British Prime Minister Boris Johnson wants to “work with our French friends” to stop the high-risk channel crossings that bring illegal immigrants to the UK, he told BBC News on Tuesday.

The crossings are the “activity of cruel and criminal gangs who are risking the lives of these people, taking them across the channel, a pretty dangerous stretch of water, in potentially unseaworthy vessels. We want to stop that,” he said.

“This is a very, very bad and stupid and dangerous and criminal thing to do.”

Johnson also said he wants to change the “panoply of laws” that allow illegal immigrants to stay once they have arrived in the UK.

Johnson has dispatched Immigration Minister Chris Philp to Paris for talks with the French government.

Addressing Parliament in June, Philp said the UK were “working with the French to prevent ‘on the beach’ embarkations taking place.”

“The crossings are entirely unnecessary because France is a safe country and France has a very well established and functioning asylum system,” he said.

“About 50 percent [of embarkations] are stopped before they get onto the water—we would like that number to be a great deal higher.”

When asked to confirm that UK immigration laws are fair, Philp told the House of Commons that the UK granted 20,000 people and an additional 3,000 unaccompanied children protection or asylum in 2019, which was the highest number of any country in Europe.

He also highlighted the points-based system due to come in from Jan. 1, 2021, to replace the current free movement immigration system.

“Our legal migration methods are entirely fair, we therefore should be policing, with complete effectiveness, illegal migration routes, and the Home Secretary and I are determined to do that,” he said.

His duties will include seeking tougher enforcement measures and the direct return of boats to France following interceptions at sea, according to a media statement.

“Dan’s appointment is vital to cutting this route by bringing together all operational partners in the UK and in France. This is a complex problem but across government we are working to address many of these long-standing issues,” Patel said.

“This role is vitally important in the fight to end the heinous crime of people smuggling across the Channel,” O’Mahoney said.

Britain says the EU’s so-called Dublin regulation, which currently governs the UK’s return of illegal immigrants, is too inflexible and has very tight timeframes.

The Dublin regulation requires that the UK must request that France take responsibility for an immigrant that has come via their shores within 3 months of the applicant’s asylum application.

Many of the migrants seeking to reach Britain come from Afghanistan, Iraq, Syria, and countries in Africa.

Some stand a chance of being granted asylum, while others, considered illegal economic migrants, are unlikely to be allowed to remain in Britain.