US Commission Calls for Tougher Actions to Combat Chinese Threats 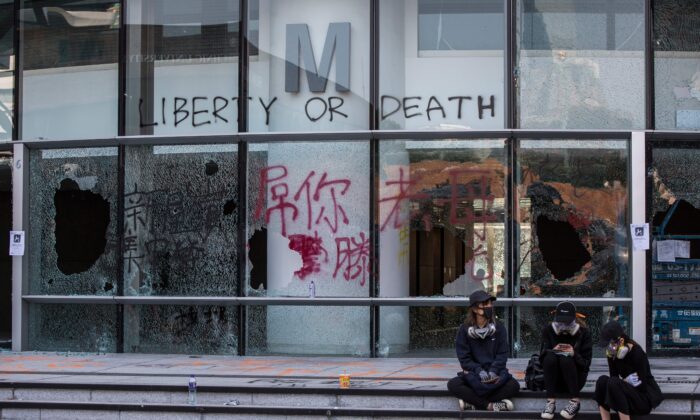 A U.S. congressional commission has urged for tougher action to counter economic and military threats posed by the Chinese regime, in its annual report released on Nov. 14.

The report by the U.S.-China Economic and Security Review Commission, which is tasked with monitoring the national security implications of U.S. relations with China, warned that the regime is “steeling itself to prevail in what it expects to be a protracted, multidecade confrontation with Washington and its allies.”

It said the regime is seeking to build a “world-class” military, steal American intellectual property (IP), and step up its efforts to influence and interfere with the domestic affairs of other countries.

In response, “Washington must plan for worst-case scenarios while trying to achieve the best ones,” the commission said.

The title suggests that Xi is democratically elected, rather than the victor of an internal power struggle within the top echelons of the Chinese Communist Party (CCP), the report said.

Instead, the Commission has decided to use Xi’s party title, “general secretary”—being the title “by which he derives his authority.”

“China is not a democracy, and its citizens have no right to vote, assemble, or speak freely,” the report added. “Giving General Secretary Xi the unearned title of ‘President’ lends a veneer of democratic legitimacy to the CCP and Xi’s authoritarian rule.”

Xi holds three key titles: his party title; his title as head of the CCP’s military, “chairman of Central Military Commission”; and his title as head of state, which—translated from Chinese—is “state chairman.” Chinese media and sources do not use the Chinese word for “president” to refer to Xi, but rather “general secretary” or “chairman.” However, Chinese state media routinely mistranslate his title of “chairman” as “president” in English reports. This usage has become the norm among Western media and governments.

The report said that Chinese firms listed on U.S. stock markets are not subject to the same disclosure requirements as U.S. companies, thus exposing investors, including of pension funds, to higher risks of insider trading, fraud, or possible default.

“The goal is not to slam a door. It is rather to ensure compliance in a way that protects all investors,” said Robin Cleveland, vice chairman of the commission, during a press conference on Nov. 14. “We just want transparency.”

The issue has taken on new urgency, she said, given what she called an alarming uptick in China’s debt levels, ranging from household mortgage debt to $3 trillion in foreign debt, as well as falsified and vague data about the Chinese economy.

As of September, 172 Chinese firms were listed on major U.S. exchanges, with a total market capitalization of more than $1 trillion, according to the report.

In June, U.S. lawmakers introduced a bill in both the Senate and House to compel Chinese companies listed on U.S. stock exchanges to open their audit books to U.S. regulators, or face delisting.

In addition, pressure has been mounting for U.S. pension funds to divest from Chinese securities. In November, lawmakers introduced legislation that would block the largest federal retirement fund from investing in Chinese stock.

The report recommended that Congress require the U.S. Treasury, Commerce Department, and Securities and Exchange Commission to compile a report on U.S. investors’ ownership of Chinese bonds and debt instruments.

It also urged Congress to enact legislation requiring companies that seek initial public offerings in the United States to disclose any support from the Chinese regime, links to the CCP, and details of company officers with current or former CCP official positions.

In response to the escalating crisis in Hong Kong, the United States should enact legislation that suspends special economic privileges the city enjoys under U.S. law, should the Chinese regime deploy troops to crush the protests, the report said.

Hong Kong has been racked by nearly six months of protests sparked by local opposition to Beijing’s creeping influence in the city, which reverted from British to Chinese rule in 1997 with the promise that its autonomy and freedoms be preserved.

Today, senators initiated a “hotline” action to expedite passage of a bill in support of Hong Kong protesters, and will pass if no senators lodge an objection to it, paving the way for it to signed into law by the president. The House version of the bill passed unanimously in October.

The proposed legislation would require the U.S. administration to review annually whether Hong Kong is sufficiently autonomous from mainland China to justify the special trading privileges currently afforded to it—which have bolstered its status as a world financial center.

It also urged Congress to direct the State Department to develop specific benchmarks to measure the “high degree of autonomy” the territory is meant to enjoy from Beijing.

On the issue of Taiwan, which Beijing views as a renegade province, the commission called on Congress to direct the Pentagon to prepare a study that would form the basis of a 15-year action plan to deter Beijing from attempting to absorb the island by force. The regime has never ruled out using the military to unify Taiwan with China.

The report also called for legislation to increase military exchanges and training with Taiwan.

In response to intensifying efforts by Beijing to isolate Taiwan diplomatically, the commission urged Congress to direct the U.S. secretary of state to provide a report with a plan to counter such activities.

“Just as nations sought freedom from the iron grip of the Soviet system, we are bearing witness to aspirations in both Hong Kong and Taiwan which require our reconsideration of the commitments we made under the one-country, two-systems model,” Cleveland said.

The commission also recommended the re-establishment of an advisory board under the FBI (Federal Bureau of Investigation) to help academic institutions guard against Chinese state-sponsored theft of sensitive technologies and research.