US Global Center on Propaganda Pivots to Address COVID-19 Disinformation 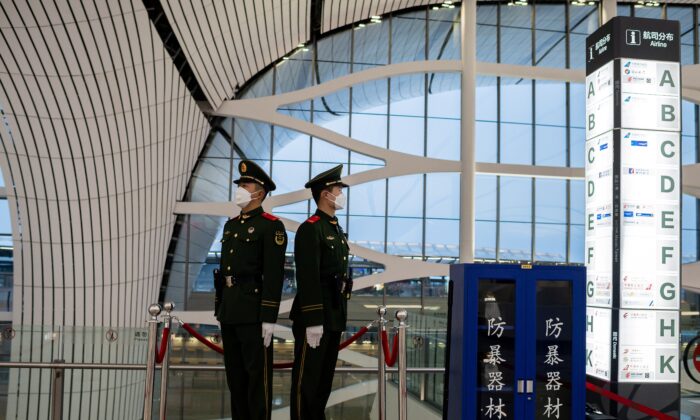 Foreign actors—namely China, Russia, and Iran—have been using the global pandemic to “exploit the information space for harmful purposes” according to the top official with the Global Engagement Center (GEC), which is dedicated to exposing and countering disinformation.

At a recent on-the-record briefing, special envoy Lea Gabrielle, the coordinator of the State Department’s GEC, said they have tracked narratives promoted by the three countries on the virus since January. One of the center’s main responsibilities is to keep the State Department’s leadership informed on the international information landscape.

Gabrielle spoke at length about the disinformation campaign launched by the Chinese Communist Party. She said they monitored China’s malign disinformation efforts to falsely blame the United States as the origin of the CCP virus, and their efforts to paint a picture of the CCP’s “supremacy” in handling the health crisis.

“What we’ve seen is the CCP mobilizing its global messaging apparatus, which includes state media as well as Chinese diplomats, to push out selected and localized versions of the same overarching false narratives,” she said at a March 27 teleconference.

“I will say that the information space is ever evolving,” she said, referring to Beijing’s disinformation efforts. “It’s been very fluid and China’s approach to it has been as well.”

One aspect the GEC is continuing to take note of and assess is the fact that they are seeing Russian, Chinese, and Iranian state information operations “converging around the same disinformation narrative themes about COVID-19” according to Gabrielle.

Internal government documents obtained by The Epoch Times have highlighted how the Chinese regime purposefully underreported cases of the CCP virus and censored discussions of the outbreak, helping to fuel the spread of the disease.

In one recent case, the GEC assessed false narratives in Africa being pushed by Chinese officials. They found these narratives “received mostly negative reactions and then they virtually died back down,” so instead, CCP officials shifted their game. She said the team is able to analyse changing narratives through a number of different data science tools.

Between Jan. 1 and March 18, the GEC collected and analysed social media posts from dozens of official Chinese Government and diplomatic accounts in Africa. Initially they found all accounts were silent about the CCP virus, but by the end of the period about 60 percents of posts were related to the discussion of COVID-19.

“We had seen China focusing on four prominent narratives from our analysis” in Africa, she said. “One was China’s successful containment of the virus. A second was calls for international collaboration. A third was the World Health Organization’s praise of China. And a fourth was China’s economic resilience.”

She noted that anti-U.S. Twitter posts counted as only a tiny part of the overall posts and that they performed poorly to African audiences who “essentially rejected the claims that coronavirus had originated in the U.S.” African audiences were also rejecting claims that the term “Chinese virus” was a racist reference, so instead, CCP officials moved away from this and refocused on the “praising China’s actions” narrative.

“We’re also seeing something similar in the Western Hemisphere,” Gabrielle said, referring to the changing nature of disinformation campaigns.

In Italy, PRC (People’s Republic of China) officials have also shifted their narratives to better adapt to different audiences. In the western hemisphere, CCP virus related topics account for about “half of the content pushed by official Chinese accounts” she said.

“PRC officials have become really active and are showing concerted efforts to systematically cater their messages to global audiences using hashtags, increasing their social media followers to convince people that they’re acting responsibly, rather, and providing aid,” she added.

Hashtags and social media have been key tools in the propaganda kit utilized by the CCP. In recent weeks, state-run media Xinhua News has promoted the hashtags “#Trumpandemic” and “#TrumpVirus” on its news posts on both Twitter and Facebook. A Beijing-based commentator told the state-run Global Times that the term “Trump pandemic” is “not only vivid but also very accurate.”

The Epoch Times reached out to the State Department for additional comment on China’s disinformation campaign. A spokesperson declined to comment.

Citizens in China, meanwhile, don’t have access to social media platforms such as Twitter and Facebook and are fed a constant stream of propaganda by the communist regime there.

The combat the barrage of false narratives coming from different state actors, the U.S. government has launched a number of initiatives, according to Gabrielle, “including public messaging at home and overseas, diplomatic engagement, and promotion of fact-based information to local audiences.”

The Epoch Times previously reported on U.S. officials becoming more vocal on social media in addressing China’s disinformation push and how federal agencies are ramping up efforts by setting up new websites to separate fact from fiction.

At the briefing a reporter also asked about the extent the GEC was working with private tech companies to combat these narratives. Gabrielle said they have a “technology engagement team” who work with different companies and social media platforms, but added that countering disinformation “takes a variety of approaches.”

“Depending on the situation, there’s just no cookie-cutter approach. We have to look at each situation individually and figure out what the best practices are,” she responded. “Tech companies are looking at their specific platforms … But our data scientists are looking at the entire disinformation ecosystem.”

The Epoch Times refers to the novel coronavirus as the CCP virus because the Chinese Communist Party’s coverup and mishandling of the epidemic, which started in the central Chinese city of Wuhan, allowed the virus to spread throughout China and create a global pandemic.

Although the narratives pushed by the CCP can change quickly, the goals are the same: to defect responsibility over their botched handling of the CCP virus and to portray an image that they have successfully contained the outbreak.

“I think that it is really sad to see state actors taking advantage of a global health crisis to try to push their own agendas,” Gabrielle added. “I think a very important part of decreasing the vulnerability of audiences is by making them aware of how a disinformation environment can be manipulated.”