US Health Secretary: Obamacare Replacement Won’t Be Proposed Until After Supreme Court Ruling 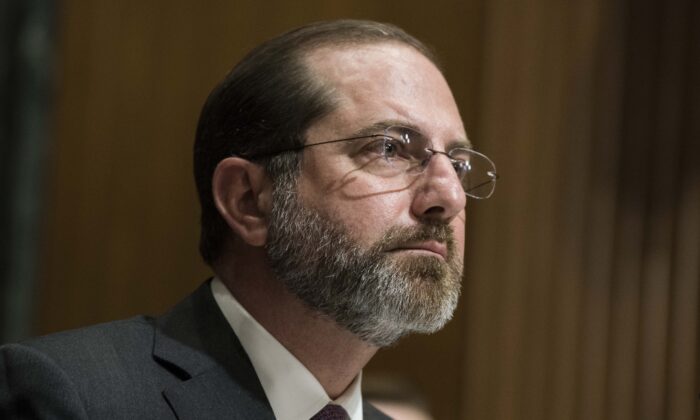 U.S. Secretary of Health and Human Services (HHS) Alex Azar said on Thursday that a backup plan to replace the Affordable Care Act (ACA), or Obamacare, will not be proposed until after the Supreme Court rules on a pending lawsuit challenging the health care law.

Azar made his comments during a Senate Finance Committee hearing on the HHS budget request, drawing criticism from Democratic senators who expressed concern over the lack of an Obamacare replacement proposal when there is a real chance that the law could be struck down by the Supreme Court. In December, a circuit court ruled that a key tenet of Obamacare, known as the individual mandate, was unconstitutional. The court then sent the case back to a lower court to decide whether the individual mandate was severable from the rest of the ACA. If it isn’t severable then the entire ACA could possibly be invalidated.

During the hearing, Sen. Bob Menendez (D-N.J.) asked Azar why the administration was not revealing their alternative to the ACA.

“I don’t know what you’re waiting for. If you have a better idea show us, but I have yet to see one plan that the administration has put forward over the healthcare of millions of Americans. What are you waiting for?” Menendez asked.

In response, Azar said the administration would wait until there is a “final judgment” by the Supreme Court.

“There is a very long process to go to even see whether the statute is struck down or even in part is struck down by the Supreme Court,” he said. “These are hypotheticals at this point. We are faithfully administering the ACA now.”

Menendez then shot back, “These are hypotheticals that we don’t play with.”

Azar’s comments echo remarks he made in January in an interview where he said “there’s really not a need for a replacement” of the ACA “until there’s a final Supreme Court decision” or until Congress is ready to work with the president in repealing and replacing the ACA.

“Frankly, it’s not a material thing right now. Our focus is on 331 million Americans, how do we protect what works for them in health care, make it better, fix anything that’s not working for them,” he said.

The Supreme Court is still deciding on whether to take up the case for review and may consider it during their conference on Feb. 21. The top court rejected requests by the House of Representatives and Democratic-led states to review the case on an expedited schedule in January, but did not rule out whether they would review the case at all.

In early January, lawmakers and state officials from a coalition of blue states asked the high court in a pair of appeals to take up the case and review the lower court’s decision on an expedited schedule. They argued that the court’s expeditious consideration is necessary because of the uncertainty the lower court’s decision has on health insurance and the health care marketplace, as well as for millions of Americans who have purchased coverage under Obamacare (pdf).

In December 2019, the 5th U.S. Circuit Court of Appeals ruled 2–1 that a key tenet of Obamacare was unconstitutional. The judges in the majority said a provision in the law, referred to as the “individual mandate,” which required people to obtain health insurance or pay a tax penalty, was invalid after Congress removed the tax penalty in 2017, rendering the law unenforceable.

Following Congress’s amendment, a group of red states and two private individuals filed a lawsuit claiming that the provision was no longer constitutional and that the entire ACA needed to be invalidated because the provision was inseverable from the rest of the law.

The Trump administration, which has declined to defend the ACA, has urged that the Supreme Court should not take up the case because the district court has not yet decided on the question of severability. It said that the court to defer the review of the decision until after the case has completed its proceedings in the lower courts.