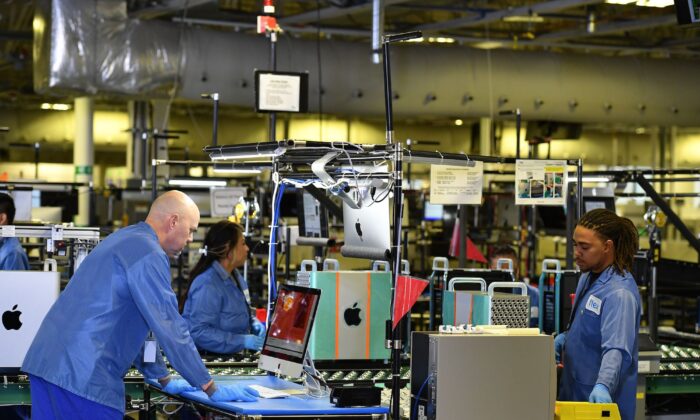 Manufacturing in America, as measured by a key business activity gauge, surged to a 15-month high in July, exceeding economists’ expectations.

The Institute for Supply Management (ISM) business survey, published on Monday, shows that its topline manufacturing activity indicator, called the Purchasing Managers’ Index (PMI), surged to a reading of 54.2 in July. Readings above 50 indicate expansion while those below mean contraction.

“The PMI signaled a continued rebuilding of economic activity in July and reached its highest level of expansion since March 2019,” said Timothy Fiore, chair of the ISM Manufacturing Business Survey Committee, in a release (pdf).

Economists polled by Reuters predicted the manufacturing gauge to rise to 53.6 in July, so the higher-than-expected number is encouraging, particularly in light of April’s 11-year low of 41.5.

“In July, manufacturing continued its recovery after the disruption caused by the coronavirus pandemic,” Fiore added.

Still, the slowing dynamics of month-over-month expansion in the manufacturing index, from 9.5 percent growth from May to June compared to a 1.6 percent rise from June to July, fuel speculation about the sustainability of the economic recovery, especially in light of a recent surge in reported COVID-19 cases in parts of the country.

“Manufacturing is recovering from low levels and the outlook is uncertain, given the threat of repeated disruptions from virus outbreaks,” said Rubeela Farooqi, chief U.S. economist at High Frequency Economics, in remarks to The Associated Press.

Another manufacturing sector gauge tapped by ISM in the survey is the New Orders measure, which soared to 61.5, up 5.1 percent from June.

“Orders starting to pick up. [An] increase of about 35 percent to 40 percent,” said a chemical product manufacturing executive.

“Incoming orders are slow. This is usually our busiest time of the year, but production is reduced due to lack of demand. Additional layoffs expected,” said an executive at a furniture maker.

Another gauge, the production index, showed a 4.8-percent growth from June to July, coming in at 62.1, the highest reading of all the ISM gauges.

“Manufacturing outlook has improved greatly in June, as business has resumed at nearly 100 percent. We have implemented a number of safeguards that are costing extra money, but we are running,” said an executive at a computer and electronics products maker.

Other executives were downbeat in their responses to the ISM survey, which asks business leaders if their companies are performing better compared to the previous month.

“Overall business remains down almost 70%,” said an executive at a manufacturer of transportation equipment. “We are hanging on to as many employees as possible, but we will have to lay off 30% or more for at least two to three months until September or October.”

While factory employment improved in July, it remained in contraction territory. The Employment index showed a reading of 44.3. While up by 2.2 percent from June’s reading of 42.1, it suggests a continued trend of manufacturers shedding jobs, though at a slowing rate.

Manufacturing accounts for around 11 percent of the U.S. economy.