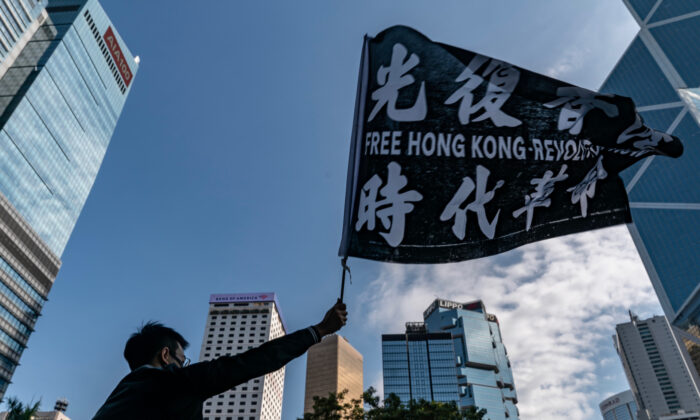 Professionals from advertising sector take part in a rally to commence a five day strike in Hong Kong on Dec. 2, 2019. (Anthony Kwan/Getty Images)

A U.S. lawmaker has condemned the Chinese regime for sanctioning American nonprofits in response to the enactment of legislation supporting the Hong Kong protest movement, while the targeted NGOs have vowed not to cave to authoritarian pressure.

In retaliation to President Donald Trump signing the Hong Kong Human Rights and Democracy Act last week, the regime on Dec. 2 announced it would sanction several American pro-democracy organizations. The nature of the sanctions remains unclear.

“This threat of sanctions from China’s authoritarian regime is antithetical to democratic values and universal human rights,” said Michael Abramowitz, president of the Freedom House, one of the NGOs targeted for sanctions.

He said that standing with Hongkongers “who are demanding respect for their freedoms” and “calling on Beijing to live up to its obligations under the Sino-British Joint Declaration” are in line with the organization’s mission.

“We do not look to the Chinese Communist Party for permission to support such legitimate goals,” he continued.

The law would make Hong Kong’s special trade status with the United States contingent upon whether the city is “sufficiently autonomous” from the mainland.

“These NGOs have supported anti-China plotters … They are much to blame for the chaos in Hong Kong,” she said, adding that the organizations “shall pay the price for what they’ve done.”

The regime also suspended U.S. Navy visits to Hong Kong in response to the Act’s enactment.

The Global Times, a hawkish Chinese state-run newspaper, said in a commentary on Dec. 2 that the sanctions are only part of the “first wave of the countermeasures,” in response to the United States’ actions.

Sen. Marco Rubio (R-Fla.), who introduced the bill in the Senate, told The Epoch Times the regime’s response would not deter the United States and other democracies from calling out the regime’s rights abuses.

“Beijing is using its typical bullying tactics in threatening sanctions against U.S.-based NGOs that promote human rights, the rule of law and democratic governance—the very values China committed to uphold in Hong Kong in the 1984 Sino-U.K. Joint Declaration,” Rubio said in an emailed statement.

Under this agreement, the Chinese regime pledged to preserve Hong Kong’s autonomy and freedoms when the city’s sovereignty was handed over to Beijing in 1997.

He added that “[t]he United States and the free world will continue to hold the Chinese government and Communist Party accountable for targeting and abusing Hong Kongers, Uyghurs, Tibetans, Christians, and others who are pursuing their God-given rights.”

“Rather that target an organization that seeks to defend the rights of the people of Hong Kong, the Chinese government should respect those rights,” Kenneth Roth, executive director of Human Rights Watch, told The Epoch Times in an email.

The National Democratic Institute said that it “remains committed to supporting peaceful processes and constructive citizen engagement in Hong Kong” to advance the promised rights under the Hong Kong Basic Law and the city’s political autonomy.

Carl Gershman, the president of the National Endowment for Democracy, said that the Chinese regime’s assertion that the organization is funding or organizing protests in Hong Kong is “a sad attempt to distract from the reality of a genuine grassroots movement.”

He pointed to the Nov. 24 district council elections as a demonstration of Hong Kong’s democratic institutions, which served as “vibrant models of public participation in Asia.” The election saw pro-democracy camp take over 388 out of 452 seats in a sweeping victory against the pro-Beijing candidates.

“This is not the first time the CCP [Chinese Communist Party] has sought to scapegoat others for its own failures of governance,” said Daniel Twining, the institute’s president.

He said that the action will only strengthen their resolve to “counter the CCP’s well-documented efforts to corrode democracy.”

Flight Evacuating US Citizens From Wuhan May Land at Ontario Airport

Facebook, Others Restrict Business Travel to China as Warnings Grow

Details About the First Known Super Spreader of Wuhan Pneumonia

Canada Joins US to Warn Against China Travel as Virus Spreads, Markets Slide