US Not Out to ‘Decouple’ From China, Defense Official Says in Beijing 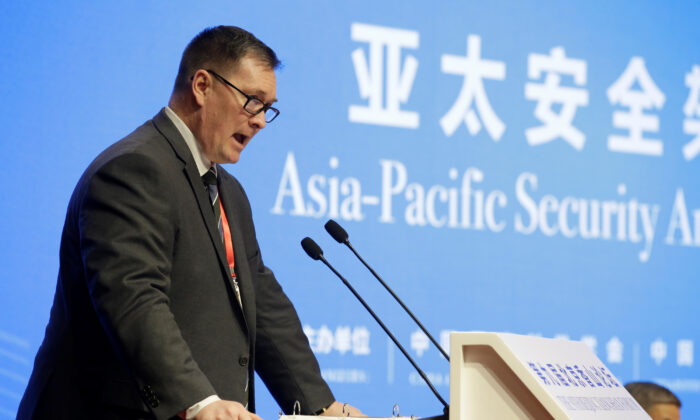 BEIJING—The United States is not seeking to “decouple” from China and not asking any country to choose sides, a senior U.S. defense official said on Oct. 21, offering a softer outlook on relations bruised by a bitter trade war.

China has been nervous that the United States is seeking to sever, or at least severely curb, economic ties in what has been called a “decoupling.” Beijing fears that the Trump administration wants a complete separation with China.

The two countries have been working to resolve their trade dispute, with the United States announcing a “phase 1” deal with China on trade matters and suspending a scheduled tariff hike for October.

“One area that I would comment and challenge on is—I’ve heard this on this panel and other panels—the idea that the United States approach is fundamentally based on decoupling,” Sbragia said at a panel on the sidelines of the Xiangshan Forum.

“I’ll tell you from personal experience that’s not only not official U.S. policy, that’s not even a policy discussion that I hear in my day-to-day business. That’s not even how we think about that,” he said.

“If decoupling was actually the practice, what you would see on a day-to-day basis would be fundamentally different than what you see.”

What the United States is trying to do is “rebalance and right relationships to ensure that we have equity,” Sbragia, who is leading the U.S. delegation to the forum, added.

Both countries want to enhance stability and deepen their relationship to reinforce crisis avoidance, he said.

“It’s just the opposite of decoupling. It’s not to pull apart. It’s actually to in some ways deepen those relationships.”

The United States and China have bickered over other areas, including the disputed South China Sea and Chinese-claimed Taiwan, with Beijing especially nervous about U.S. military activity in what it views as China’s backyard.

Sbragia said Washington wanted an open, free and inclusive Indo-Pacific region based on certain principles, including peaceful resolution of disputes, freedom of navigation and overflight, and fair trade and investment.

“Our treaty alliances in the Indo-Pacific are not maintained as a relic of Cold War thinking, as some contend, but are manifestations of our enduring commitment to ensuring our allies and partners are secure in their sovereignty,” he added.

“Our inclusive vision extends to China as well. Competition with China does mean conflict, and the United States will not ask any country to choose between Washington and Beijing. That’s not how the logic of our framework, our approach, is set.”