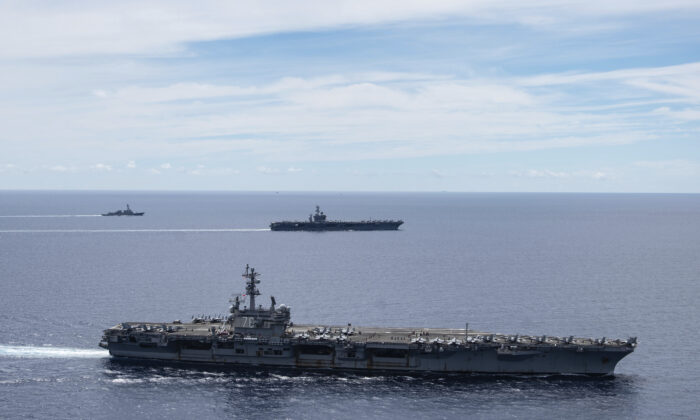 The United States on July 13 formally rejected nearly all of Beijing’s major territorial claims in the South China Sea, as the administration dials up its actions against threats posed by the Chinese Communist Party.

“Beijing’s claims to offshore resources across most of the South China Sea are completely unlawful, as is its campaign of bullying to control them,” Secretary of State Mike Pompeo said in a statement.

While U.S. officials have previously described Beijing’s activities in the region as “unlawful,” Pompeo’s remarks represent the United States’ official rejection of specific claims made by Beijing by aligning with a 2016 ruling by an international tribunal. The Philippines had challenged China’s claims in the waterway and brought the dispute to international court.

That binding decision rejected China’s maritime claims around the Spratly Islands and neighboring reefs and shoals. The Chinese regime has refused to recognize the ruling.

“The PRC [People’s Republic of China] has no legal grounds to unilaterally impose its will on the region,” Pompeo said.

China, the Philippines, Vietnam, Malaysia, Brunei, and Taiwan have competing claims in the South China Sea. Beijing’s claims are the largest, covering almost all of the waterway. Home to rich fishing grounds and potentially valuable natural resources, the South China Sea also contains one of the world’s major shipping routes.

The regime has in recent years sought to bolster its claims in the strategic waterway by building military outposts on artificial islands and reefs. On top of this, it also has deployed coast guard ships and Chinese fishing boats to intimate fishing vessels, block access to waterways, and seize shoals and reefs. Its aggressive actions have caused territorial spats with Vietnam, the Philippines, and Malaysia in recent years.

The secretary added that “the PRC’s predatory world view has no place in the 21st century.”

Applying the 2016 ruling, the United States rejected China’s maritime claims to various areas and features of the South China Sea, which are also claimed by the Philippines, Malaysia, Brunei, and Indonesia. As a result, it will regard any Chinese harassment of fishing vessels or oil exploration in those areas as unlawful, the state department said.

The U.S. military has conducted freedom of navigation exercises and naval drills in the disputed waters to counter Beijing’s claims and preserve access to the areas that it says constitutes international waters. This month, the United States sent two aircraft carriers to participate in exercises in the South China Sea—while Beijing was also conducting drills in the region.

The department’s decision reflects a tougher response by the administration to Beijing’s aggression, including the regime’s coverup of the CCP virus outbreak, tightening control over Hong Kong, and rights abuses against ethnic minorities.

“The world will not allow Beijing to treat the South China Sea as its maritime empire,” Pompeo said.

“We stand with the international community in defense of freedom of the seas and respect for sovereignty and reject any push to impose “might makes right” in the South China Sea or the wider region.”

2 ‘Sudden Collapses’ in China Suspected to Be COVID-19 Deaths

CCP Virus Outbreaks Out of Control in Northern China