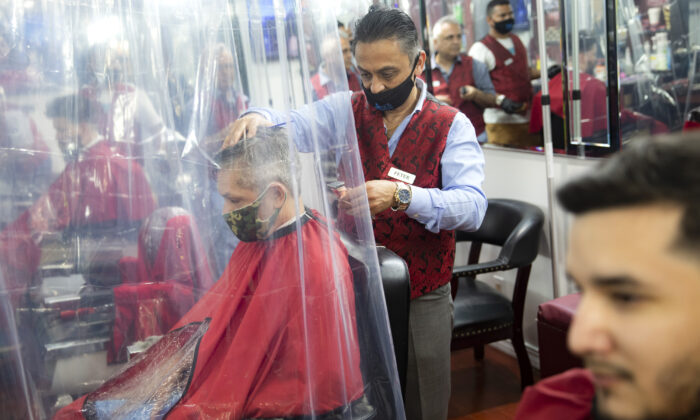 The Organisation for Economic Co-operation and Development (OECD)’s report made the employment projections based on two possible scenarios—one with and one without a second wave of CCP (Chinese Communist Party) virus infections in 2020.

According to those projections, if the United States avoids a second wave, unemployment is likely to remain at around 10.4 percent in the fourth quarter of 2020, around 8 points higher than it was at the end of 2019. If a second wave were to materialize, however, unemployment could rise by as much as 7 percent from its current level.

If the CCP virus “is kept under control and the economy restarts at good speed,” the OECD says that a considerable number of people who were temporarily laid off could be reabsorbed into the workforce.

The unemployment rate could continue to fall by as much as 4 percent between now and the end of the first quarter of 2021—if a second wave of the CCP virus does not materialize, the report said.

The OECD Employment Outlook 2020 report looks at the effects the virus and the measures to combat it have had on employment across 37 countries.

The report says that the CCP virus crisis has affected some groups more than others, with the self-employed, temporary workers, and low-wage earners being disproportionately affected. Low-paid workers also had fewer opportunities to retain their jobs by working from home. According to the OECD, 59 percent of high-earning American workers reported that they worked from home in April, compared to 34 percent of low-earning workers.

Employment made a strong comeback in the leisure and hospitality industries, as well as in retail, education, health, and manufacturing, according to a July 2 report (pdf) by the U.S. Bureau of Labor Statistics.

In June, the unemployment went down to 11.1 percent and total nonfarm payroll employment rose by 4.8 million, the report said.

President Donald Trump called the employment gains “spectacular news for American workers and American families” at a press conference last month. Trump said the increase was the largest monthly jobs gain in the history of the United States, and that the U.S. economy was “roaring back.”

The OECD calculated that unemployment in the United States increased from a 50-year record low of 3.5 percent in February 2020 to 14.7 percent in April—a record since the OECD began its measurements in 1948. However, the U.S. economy has rebounded, the report shows, with unemployment declining to 11.1 percent in June.

“The comparatively large unemployment response in the United States is likely due to its reliance on unemployment insurance benefits to secure the incomes of job losers instead of job retention schemes,” unlike other countries, the report stated.

Across the United States, 26 states—making up around 70 percent of the population—are operating short-time compensation programs. At the federal level, the Paycheck Protection Program, or PPP, has provided small businesses with loans totaling more than 3 percent of GDP.

According to the U.S. Department of the Treasury, the loans are designed to allow companies to continue to pay their employees, and can be forgiven if employment and worker compensation are maintained. Economic Injury Disaster Loans of up to $10,000 were granted to small business owners.

Furthermore, the Internal Revenue Service is offering Employee Retention Tax Credits to distressed companies with less than 100 employees. “For each employee, wages (including certain health plan costs) up to $10,000 can be counted to determine the amount of the 50 percent credit,” the agency says.