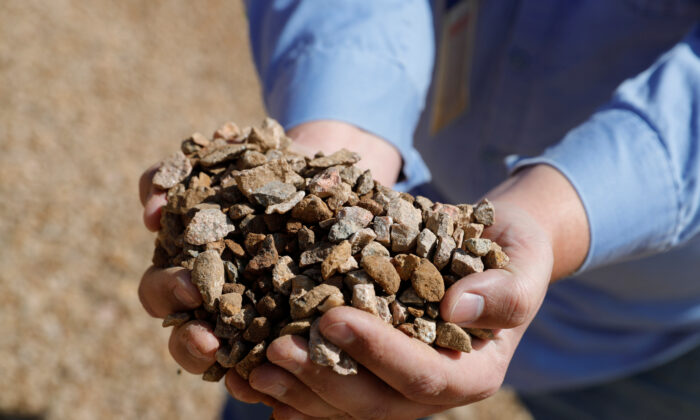 The Chinese communist regime is ready—and willing—to use the country’s near monopoly in rare earth elements (REEs) as a trump card in any trade war with the United States, according to China policy analysts.

A report out this week from independent strategic consultants Horizon Advisory indicates that China is moving to take advantage of the CCP (Chinese Communist Party) virus crisis to wrest control of strategic markets. Furthermore, Beijing’s fusion of its military and civil spheres—combined with its near-monopoly in rare earths—could make this market the Unites States’ Achilles heel.

According to China scholar and Horizon Advisory co-founder, Emily de La Bruyère, Beijing aims to make the United States directly and indirectly dependent on China for critical minerals and REEs.

REEs are difficult-to-recover metals with unique properties that make them essential ingredients in the production of state-of-the-art batteries, electromagnets, weapon systems, night-vision scopes, and other hi-tech products. According to the Department of the Interior, the United States is heavily reliant on imports of these critical mineral commodities—and in particular on imports from China.

“The PRC has been focused on rare earths for as long as it has existed,” de La Bruyère told The Epoch Times in a statement. “Chinese sources explicitly treat rare earths as tools of power—and coercion—in today’s globalized industrial system. This orientation rests on China’s military-civil fusion strategy: Beijing weaponizes integration into open, cooperative global systems for offensive ends. The United States, its allies, and its partners need jointly to recognize as much and respond, to scale.”

According to an earlier report from the Horizon team on the CCP’s efforts to subvert U.S. recovery investment, the Chinese regime views the CCP virus crisis as “an opportunity; a chance to expand its position in U.S. markets, supply chains, and critical infrastructure.” In times of economic crisis, the report says, the communist regime targets markets and assets it considers vulnerable. “The goals are to foster dependence, to siphon U.S. research and development, and to co-opt markets.”

The analysts’ new report quotes Chinese researchers Gao Fengping et al. in 2019 as saying that “Amid the heated trade conflict between China and the United States, China will not rule out using rare earth exports as leverage to deal with the situation.”

According to the report, Yang Danhui of China’s Academy of Social Sciences said in 2018 that China’s rare earths strategy is one of capturing “international supply chains for rare mineral resources, and gradually mastering the leading power of rare earth trade rules and international pricing.”

Under a WTO ruling from 2014, China’s communist regime was obliged to abolish its quotas on rare earth exports. However, the Horizon Advisory report explains that while China did adhere to the ruling, it circumvented it by replacing the quotas with strict state control of the country’s rare earths mining and processing industry, allowing the regime uninterrupted control over production and trade.

According to Horizon Advisory’s June report, China is seeking to replicate strategies it honed during the 2008 economic crisis, where it worked to extend its presence in U.S. supply chains, manufacturing, and infrastructure systems. Notable casualties of these measures included American solar-panel producers and lithium-ion battery manufacturers. Companies that have since fallen into the hands of Chinese firms include GE Appliances, which was acquired by Chinese multinational Haier in 2016.

The report states that “Before 2008, an American worker could buy a GE refrigerator manufactured by an American firm whose profits were reinvested in the American economy. Today, just about any appliance on the market bankrolls a Chinese conglomerate, whether the product’s label indicates as much or not.”

According to the report, “Since 2018, Beijing has been preparing a second wave of its industrial strategy.”

At a recent hearing of the U.S. Senate Committee on Energy and Natural Resources on the impacts of the CCP virus on mineral supply chains, Sen. Lisa Murkowski (R-Alaska) quoted U.S. Geological Survey (USGS) data showing that in 2019, the United States imported 50 percent of national requirements for 46 different minerals, and 100 percent of 17 of them—including several rare earth elements.

“Beyond the numbers, that means we are placing our fate on others’ ability and willingness to sell to us,” Murkowski said. “And we are forcing American manufacturers to develop complex global supply chains that sometimes prompt them to realize it would be cheaper and easier to locate somewhere else.”

At the same hearing, USGS mineral specialist Dr. Nedal T. Nassar said that the CCP virus pandemic highlighted the risks supply chain systems around the world are exposed to. He also spoke of previous Chinese threats to cut off exports of rare earth elements.

“China’s threats to cut-off rare earth supplies in 2010 epitomized these risks for importing countries who had limited alternatives due to China’s near-monopoly of the rare earth supply chain,” he said.

Senior Fellow at the Atlantic Council Global Energy Center, Joe Bryan, said in his testimony that in the race for supply chain investment, “the United States is getting lapped.”

Dr. Thomas J. Duesterberg, Senior Fellow at the Hudson Institute, told the hearing that the United States’ leadership in artificial intelligence, autonomous vehicles, and the Internet of Things is being challenged by adversarial competition.

“China’s growing control over many basic materials,” Duesterberg said, “and its history of using that control as leverage for its own economic and political goals makes this a cause of concern for the continued strength of the U.S. manufacturing economy.”

Their report quotes a 2016 research report on the Belt and Road Initiative as stating that: “For China, the world’s largest producer of rare earths, the discovery of major rare earths mines outside China will undoubtedly have a profound impact on the future development of the rare earths industry. Simply relying on China’s domestic rare earth mining is unrealistic. It is critical for Chinese companies to Go Out and seek rare earth resources.”

In her May 8 testimony before the U.S.—China Economic and Security Review Commission on “China’s Strategic Aims in Africa,” Emily de La Bruyère said that the Chinese regime seeks to both gain access to and to mold foreign markets and resources while, at the same time, protecting its own. Such measures are granting the CCP a position of enduring advantage and leverage over other market participants.

“On the African continent,” she said, “this means that Beijing works not just to grab, but rather to control resource reserves, markets, industrial supply chains, and standards. Beijing translates control over Africa’s markets, resources, and standards to influence over the world’s.”

According to de La Bruyère, “China regularly overplays its hand in relations with Africa and disregards international norms as it expands its commercial interests,” including in terms of human rights and corruption. She urged the Commission that the United States must define both it’s policy goals and standing in relation to China, and to plan to compete with the CCP.

“The COVID-19 crisis should accelerate the invigoration of the U.S. strategic approach to China,” she said.

Hongkongers Not Afraid of Resisting Despite Jimmy Lai Arrest