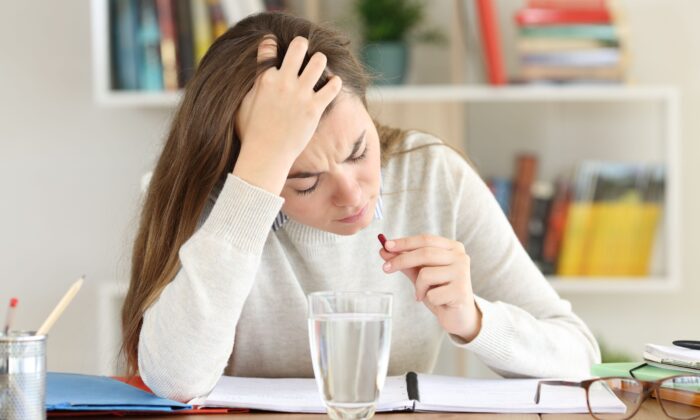 Students are getting their hands on prescription drugs without a prescription. (Antonio Guillem/Shutterstock)

This year’s incoming freshman university class will be confronted with a steeper financial burden, an increasingly competitive academic environment, and likely more pressure to take a little pill that some popular culture references say will make you “awesome at everything.”

Or they may eschew the temptation and rely on the standard practice of study, sleep, repeat.

Welcome to #GenerationAdderall, the kids who grew up in the years of the diagnosis boom of attention-deficit and hyperactivity disorder. As such, their formative years normalized the medication habit and granted easy access to stimulants traditionally used to treat children with this diagnosis.

Nonprescription use of stimulants is a growing problem for young people, bringing a risk of overdose, addiction, and damage to sleep.

Between 2008 and 2012, the nonmedical use of stimulants in 18- to 25-year-olds increased from 5.7 percent to 9.3 percent. The last two decades saw a 10-fold increase. College-age adults show the greatest prevalence, but up to 20 percent of those 12 and up report experience with nonmedical use of prescription drugs, indicating these medications are being diverted for nonmedical use in middle and high school.

I study the important role of sleep for brain function and health. My work has introduced napping as a fatigue countermeasure and a powerful vehicle to boost long-term memory, creativity, executive function, and restorative processes. Given the escalating campus crisis of stimulant use and damage to sleep, recent work in my lab has studied nonmedical use of stimulants in healthy young adults and demonstrated that they’re not getting the academic edge they want, and they could be harming themselves.

A Cocktail of Substances Leads to Complications

Misusing prescription stimulants doesn’t occur in a bubble. Compared with medical users and nonusers, adolescents who report nonmedical use of prescription drugs also engage in binge drinking more often. They also have lower academic attainment and a higher likelihood to screen positive for other substance abuse.

This is deeply troubling to those of us who study drugs’ various effects on the brain and body. Co-ingestion of prescription drugs and alcohol is linked to higher blood alcohol concentrations that can cause fatal overdoses, increased risk for liver and heart damage, impaired driving, and traffic accidents. Indeed, emergency room visits due to nonmedical use of stimulants tripled from 5,212 visits in 2005 to 15,585 visits in 2017, due to negative side effects, including nervousness, insomnia, dizziness, and cardiovascular or psychiatric problems.

Unlike opioids, the motivation to misuse stimulants isn’t to check out, but rather to check in at superhero scale. Nonmedical stimulant use is primarily to increase wakefulness, having been used for decades by individuals whose jobs include sleep disruption. For emergency workers, military, and shift workers, long periods without sleep can cause life-threatening lapses in attention. But these extreme scenarios bear little resemblance to the desired benefits by college students, who report popping pills “to improve intellectual performance” or to “party longer and drink more.”

Given these differences, a critical question is whether stimulants actually produce a cognitive enhancement in healthy, well-rested people. Surprisingly, the answer is: sometimes, and only a little.

During the two to four hours that the drug is active, some studies in healthy, well-rested adults have shown short-term increases in attention and working memory. Some, however, have shown no benefit.

In fact, some studies suggest that stimulants may simply serve to make boring tasks more interesting by acting on the dopamine system. This extraordinary excitement allows students to stick with a particularly arduous assignment for longer periods of time than they normally would, which may promote the feeling of being smarter, as well as increasing the potential for addiction.

The question then becomes: Does the cognitive enhancement of stimulants exceed the significant long-term toll on sleep and the cognitive and health processes that rely on sleep?

Research in my lab has shown that there are significant trade-offs of long-term sleeplessness for this small uptick in attention. We show that even a dose at 9 a.m. harms nighttime sleep. This is particularly true for deep sleep, which is important for complex thinking, long-term memory, immune function, and physical restoration.

Additionally, stimulants reduce performance improvements on cognitive tasks that overnight sleep confers, such as improvement in working memory and long-term memory. This reduction is directly related to a decrease in deep sleep. Therefore, even when stimulants are taken earlier in the day, they disrupt nighttime sleep and subsequent cognitive performance.

So, is the fleeting benefit from stimulants worth the damage to sleep and long-term cognitive and health processes? Is the risk of increased substance abuse that comes with the misuse of stimulants tolerable? Is it easier to be a superhero by taking a pill to stay awake and a pill to go to sleep than to simply get enough sleep?

Many students will likely be faced with these questions at college this year. As university leaders, counselors, parents, teachers, coaches, and peers, it’s our job to help them make an informed decision.

As a sleep expert and cognitive neuroscientist, I think the answer to all these questions is no.

Sara C. Mednick is an associate professor of cognitive science at the University of California–Irvine. This article was originally published on The Conversation.

A Daytime Nap Lowers Risk of Heart Attack and Stroke