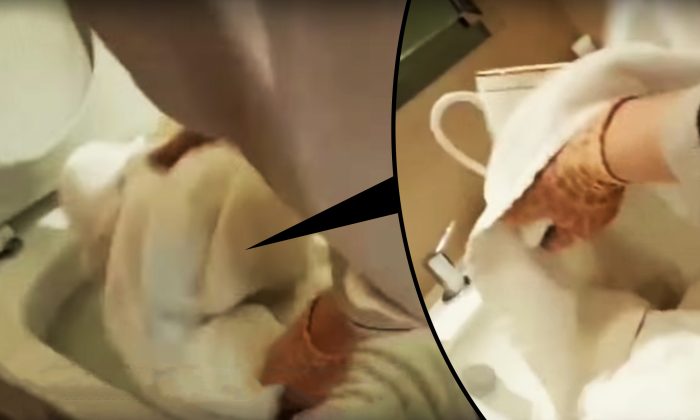 While traveling around in China, it can be intimidating walking into a public toilet, as they are known to be dirty and grotty. Most of them don’t even provide toilet paper, while some lavatories do not even have doors, or people simply don’t bother to close the doors. However, if you think that it’s safer to use the toilets at five-star hotels, you’re wrong.

In 2017, a video surfaced on the internet of cleaners from three international hotels—the Sheraton, Shangri-La, and Kempinski hotels in Harbin, China—using the same brush or bath towels to wipe toilet bowls, basins, drinking cups, or even the entire room.

You will never look at hotels the same way every again — even the expensive ones 🤢 https://goo.gl/uyvEL3

Appallingly, in the disturbing clip shot by a Pear Video, an undercover reporter who posed as an intern, the cleaners at the hotel are seen washing the towels in toilet water before wiping the floor with it. They can be heard telling the undercover reporter: “Don’t do this when there are guests around,” and “just be careful and avoid letting your boss see this.”

The authenticity of the video has been verified by health authorities following an inspection, Stomp reported.

In another 12-minute hidden-camera video that emerged in 2018 on a popular Chinese social media site, Weibo, cleaners were spotted using dirty towels to clean cups and mugs after they wiped down the showers and sinks with the same absorbent fabric.

“Such poor supervision, and it’s highly irresponsible to consumers,” one user commented, according to SCMP.

Another commented: “Everyone knows about it, the hotel has high and low levels. But some people have no bottom line.”

The first hotel featured in the video appears to be taken in the room of Conrad Beijing. The cleaner at this hotel that is situated in the vibrant Chaoyang District is seen wiping glasses, a mirror, and the bathroom with a soiled towel, which she picks up from the floor. Another cleaning lady is also spotted cleaning a coffee mug with a dirty towel.

In another scene apparently taken in a Park Hyatt hotel room, a cleaning staff member dries a cup with her apron. Meanwhile, inside a room in Shangri-La Hotel, Fuzhou, capital of Fujian Province, cleaners use the same towel to wipe the basin and cups. The cleaners at these hotels simply ignored following hygiene protocols.

What made many netizens cringe after seeing this shocking footage was that the same unhygienic practices were followed in more than a dozen five-star hotels in China, including the Le Royal Meridien Shanghai, the Sheraton Hotel in Guiyang, the Bulgari, and the Waldorf Astoria in Shanghai. Eleven of the 14 hotels that were caught in the scandal have since apologized according to a report by ABC.

These disgusting videos were captured on a hidden camera planted in different hotel rooms by a popular Chinese internet celebrity by the pen name Huazong.

11 five-star hotels in China have apologised after staff were caught using dirty towels to clean toilets, cups and showers 🤢🤮

Huazong claims he frequently patronized luxury hotels, spending over 2,000 nights in 147 upmarket hotels across several Chinese cities as per the SCMP. He opines the cleaning practices that were implemented by Chinese hotels were lower in standard compared to hotels in other parts of Asia.

The poor hygiene practices in Chinese hotels, as well as the well-known phenomenon surrounding Chinese tourists’ rude behavior, were maybe due to the corrupting influence of China’s political culture, a history of turmoil in the country—such as the Cultural Revolution and the Great Leap Forward—and the Chinese Communist Party’s (CCP) destruction of traditional morality in society and people’s belief in Gods.

Huazong gained renown back in 2011 by blogging about luxury wristwatches worn by countless government officials. He uploaded his research, a 48-page PowerPoint presentation of the officials and their glittering timepieces, onto his Weibo account, which was subsequently blocked and deleted by the CCP’s censors.

The famous businessman-turned-whistle-blower referred to it as a sign of rampant corruption, because the officials couldn’t possibly afford the glittering timepieces from top brands such as Rolex, Piaget, Omega, and Cartier with their salaries. “A simple watch can reveal the hidden corruption of some greedy officials and it shows that corruption leaves its mark,” Huazong told The Telegraph via Weibo.

Huazong began looking at the watches on the officials’ wrists after the Wenzhou rail disaster happened in July 2011 and killed 40 people. The incident sparked a public backlash over corruption and corner-cutting on China’s high-speed rail line. Without a free press and independent judiciary under the Chinese regime’s nearly 70 years of despotic rule, corruption is endemic.

“When a country is so corrupt that one lightning strike can cause a train crash … none of us is exempt. China today is a train rushing through a lightning storm … we are all passengers,” wrote one Weibo user, according to The Guardian

Is all this a terrible consequence of China’s declining moral values?

Since the Chinese Communist Party (CCP) took power, it used violence to crush the nation’s traditional culture, faith, spiritual foundation, as well as ethical concepts and social structures through campaigns such as the notorious Cultural Revolution.

As stated in The Nine Commentaries on the Communist Party, “Throughout its 80-plus years, everything the CCP has touched has been marred with lies, wars, famine, tyranny, massacre, and terror.”

“The result has been a total collapse of social, moral, and ecological systems, and a profound crisis for the Chinese people—and indeed for humanity. All these calamities have been brought about through the deliberate planning, organization, and control of the CCP.”

Go Back: Life Style
Previous: If You Wear Flip Flops Every Day, This Doctor’s Warning Will Blow Your Mind
Next: Writer Shares What Happens to Women’s Bodies in Their 40s That No One Warns Them Of
source : www.theepochtimes.com
''

The Kids Are All Right

How Black Women Athletes Paved The Way For The NBA Strike

Clinton Melton: A Man Who Was Killed In Mississippi Just 3 Months After Emmett Till

One Author's Argument 'In Defense Of Looting'