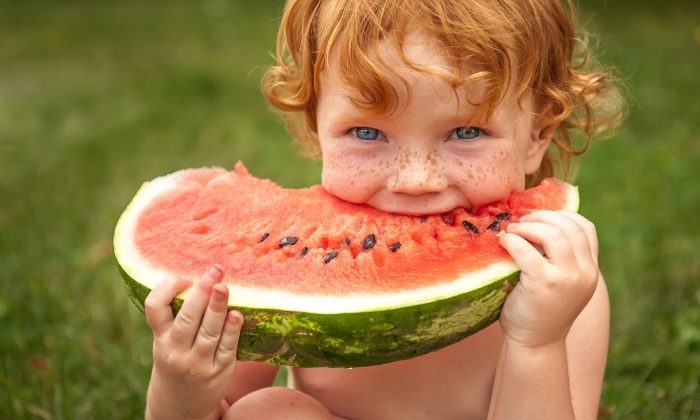 Watermelon is racking up a long list of bona fide health benefits in scientific literature. (Sharomka/Shutterstock)

Watermelon is so much more than just a highly refreshing summertime treat. From the perspective of a growing body of clinical research, it is a truly medicinal food.

There’s an abundance of clinical research these days on the medicinal properties of common foods such as watermelon. For instance, research published in the Journal of Agricultural and Food Chemistry found watermelon juice is an effective remedy for reducing the recovery heart rate and muscle soreness in athletes who were given 500 milliliters of watermelon juice (16.9 ounces) containing 1.17 grams of the naturally occurring amino acid L-citrulline.

Boosting Your Antioxidant Levels: Watermelon is exceptionally rich in lycopene (hence its red color) and other carotenoids such as lutein and beta carotene.

A 2003 study published in the Journal of Nutrition found that regular watermelon juice consumption resulted in significant increases in blood plasma concentrations of lycopene and beta carotene.

Keep in mind that lycopene has been found to have more than 40 potential health benefits, and beta carotene (especially in its natural, food-complex form) has equally plentiful health benefits, adding extra significance to this finding.

Also, the watermelon-induced increase in plasma antioxidant levels may lend explanation to why an epidemiological study of Chinese women found greater watermelon intake to be associated with a lower risk of cancer.

Reducing Blood Pressure/Improving Arterial Health: A 2012 study published in the American Journal of Hypertension found that middle-aged obese subjects with prehypertension or stage 1 hypertension who were given six weeks of treatment with a watermelon extract containing 6 grams of L-citrulline and L-arginine daily, experienced reduced ankle blood pressure and altered carotid wave reflection, an indication of improved arterial function.

The inability of the blood vessels to dilate and function properly is known as endothelial dysfunction, and is likely the most well-known initiating step in the pathogenesis of atherosclerosis.

If watermelon can ameliorate or reverse this process, it would certainly provide a breakthrough alternative to many of the drugs used for primary prevention, such as the cholesterol-lowering statin drug class, whose side effects, numbering in the hundreds, include heart muscle dysfunction and damage.

Increasing Plasma Arginine Concentrations: A 2007 study published in the journal Nutrition found that watermelon juice consumption increases plasma arginine concentrations in adults, proving that the L-citrulline from this plant origin was effectively converted into arginine.

This is a highly significant finding because arginine has a great number of health benefits, especially for ameliorating endothelial dysfunction.

There are at least 20 studies in the biomedical literature documenting its therapeutic role in improving endothelial dysfunction, and more than 150 potential health benefits of arginine are listed in the GreenMedInfo database.

This study is of particular interest because it lends support to relatively new research showing that fruit consumption isn’t harmful to type 2 diabetics.

The new study results were described as “the first evidence to our knowledge for a beneficial effect of watermelon pomace juice as a functional food for increasing arginine availability, reducing serum concentrations of cardiovascular risk factors, improving glycemic control, and ameliorating vascular dysfunction in obese animals with type-II diabetes.”

Watermelon Seeds, a Rich Source of Protein:  It behooves us to mention the fact that all parts of the watermelon have something to offer. The seeds, in fact, are an excellent source of protein. A 2011 study published in the Journal of Cancer Research and Clinical Oncology found that “[the] good nutritional and functional properties of watermelon seed meal proteins suggest their potential use in food formulations.”

While seedless watermelon is far more convenient to eat, keep in mind that they can’t reproduce without human intervention and so there are several good reasons to choose seeded varieties.

So, next time you are in the mood for watermelon and are concerned about its sugar content, “weight-promoting effects,” and possible diabetogenic and cardiotoxic properties—think again. Just sure you are careful about quality and moderation when deciding to consume watermelon. Otherwise, enjoy it and its special dose of Vitamin P (pleasure). It may just be as good for you as it tastes.

Sayer Ji is the founder of Greenmedinfo.com, a reviewer at the International Journal of Human Nutrition and Functional Medicine, co-founder and CEO of Systome Biomed, vice chairman of the Board of the National Health Federation, and steering committee member of the Global Non-GMO Foundation. This article was originally published on Greenmedinfo.com