With Restrictions Eased, 4.8 Million Jobs Back in June 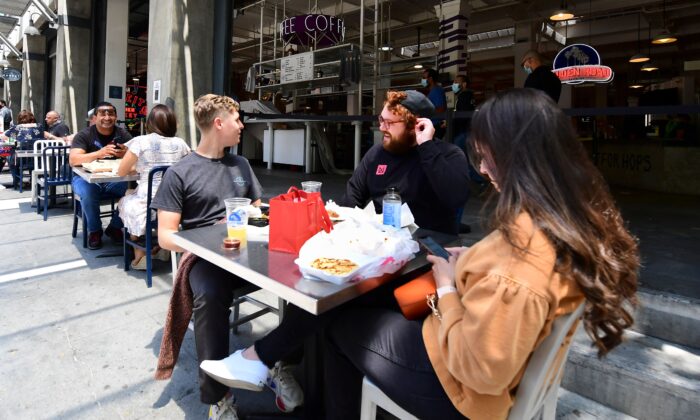 Major swaths of the American economy have been coming back to life, with 4.8 million jobs added in June as states gradually ease restrictions imposed on businesses in response to the CCP virus pandemic.

More than 2 million of the jobs sprouted back up in the hospitality sector, which had been decimated the most by the shutdowns. Other major areas of recovery were retail (over 700,000 jobs), education (over 500,000 jobs), and manufacturing (over 300,000), the Bureau of Labor Statistics reported on July 2.

“Eighty percent of small businesses are now open and we think we’re going to have some very good numbers in the coming months, because others are opening,” President Donald Trump commented during a July 2 press briefing at the White House.

Trump also touted the rise in consumer confidence, retail sales, and the number of workers re-entering the labor force. “The crisis is being handled,” he said, adding that the situation with COVID-19 is “getting under control.”

Unemployment dropped to 11.1 percent from 13.3 percent the month before.

The shutdowns sent unemployment on a roller coaster ride as the rate spiked from 3.5 percent in February to 14.7 percent in April. Since then, the economy has been recovering.

“We couldn’t be more pleased with the results today. Between this month and last month, that’s about eight million jobs, about eight million people we’ve put back to work,” Treasury Secretary Steven Mnuchin said. He said the administration’s work wouldn’t be done until every person who lost their job amid the shutdowns regains employment.

“There’s still a lot of hardship, and a lot of heartbreak in these numbers,” said Larry Kudlow, Trump’s economic adviser. “I understand that. The economy is on its way back, but we have a ways to go.”

He emphasized, though, that the economists are predicting a major recovery in the third quarter.

Regarding the rising numbers of virus cases in some areas, Mnuchin said the states are “acting appropriately” by pausing the reopening of “more contagious” settings like bars and gyms.

“We think there is the right balance and we’re working with the states of the health issues and the economic issues,” he said.