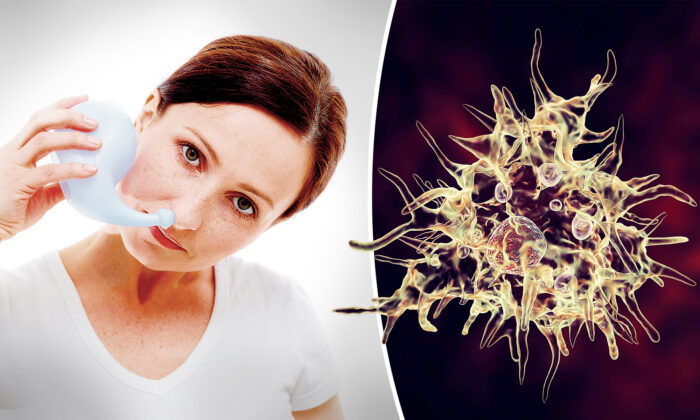 For people who suffer from chronic sinus troubles, whether as a result of allergies or a weakened immune system, using a neti pot to irrigate the nasal passages can bring significant relief.

However, as with any therapeutic measure, if not used correctly, the technique can be dangerous. And unfortunately, as the tragic case of a 69-year-old woman in Seattle demonstrated, it can even be deadly.

A year prior to going to the hospital, the woman had developed a persistent sinus infection. An ear, nose, and throat doctor had recommended nasal lavage, irrigating the nasal passages with water to clean out debris and mucus.

She used the neti pot, a device used in Ayurvedic medicine, an ancient therapeutic system developed alongside the practice of yoga in India. By the user tilting their head over and pouring a mixture of water and salt into one side of their nose and out the other, the neti pot helps clear nasal passages of mucus and debris that can block them up.

Contrary to the doctor’s instructions, “she had not been boiling water, using sterile water or using sterile saline,” as Swedish Medical neurosurgeon Dr. Charles Cobbs explained to KIRO in Seattle.

Research has shown that saline nasal irrigation (SNI), known as nasal lavage by healthcare professionals, “improves sinus-related quality of life, decreases symptoms, and decreases medication use in patients with frequent sinusitis.” While it is generally considered to have minimal side effects or risks, putting potentially contaminated water so close to the brain carries significant risks, as the Seattle case showed.

As she also had a history of breast cancer, when the woman came into Swedish Medical Center after having seizures, doctors believed the culprit might be a brain tumor. A ball-sized growth did appear on her CT scan, and while it was potentially lethal, it wasn’t cancerous.

Even after having an operation to remove the growth, the woman continued to have symptoms. It was until almost three weeks after the first procedure that the consulting neuropathologist from Johns Hopkins University suggested the possibility of “amoebic infection,” as the case study published in the International Study of Infectious Diseases notes.

“Frankly it was the last thing on my mind when I went in to operate on what I thought was a typical brain tumor,” Dr. Cobbs admitted to KIRO.

A Seattle woman died after becoming infected with a brain-eating amoeba. The woman told her doctor she had used tap…

“There were these amoeba all over the place just eating brain cells,” Dr. Cobbs said to The Seattle Times. “We didn’t have any clue what was going on, but when we got the actual tissue we could see it was the amoeba.”

On further investigation, the Swedish Medical team found that the woman had been infected with an extremely rare amoeba, Balamuthia mandrillaris. The deadly amoeba has only been diagnosed in 70 cases in the United States and 200 worldwide, according to data from a Japanese study in the journal Internal Medicine.

Found in bodies of freshwater, when it enters into the bloodstream of mammals, the amoeba is thought to be almost 100 percent lethal. In spite of “aggressive anti-amoebic therapy,” as the case study describes it, the woman’s condition only got worse and she eventually passed away.

While such infections may be unlikely, it highlighted the importance of using the neti pot properly. Balamuthia isn’t the only pathogen that can be found in non-sterile water. In 2011, the brain-eating amoeba Naegleria fowleri, which usually comes from warm freshwater rivers and lakes, killed two people in Louisiana. Their only common risk factor was using neti pots with tap water.

The answer is not to throw out your neti pot; rather, use it properly. As Dr. Partha Nandi told WXYZ, ordinary municipal water supplies are “not adequately filtered or treated and that means that bacteria and amoebas can live in tap water and once in your nose can cause very serious and deadly infections.”

Dr. Nandi pleaded with viewers to “[…] please use distilled or sterilized water that can you [sic] buy at the grocery store.” Saline solution can also be purchased at most pharmacies.

A more economical and environmentally friendly option would be to boil tap water for 5 to 10 minutes and allow it to cool before use. Other ways to keep your neti pot clean are to include small amounts of baking soda, which has demonstrated anti-bacterial properties.

While the chances that your neti pot could make you sick or even kill you are extremely rare, it’s better not to take the risk. Keeping your neti pot clean and using clean water aren’t optional but essential.

Go Back: Life Style
Previous: How to Get Some Emotional Distance in an Argument
Next: 95 Percent of Tested Baby Food in the United States Contains Toxic Metals: Report
source : www.theepochtimes.com
''