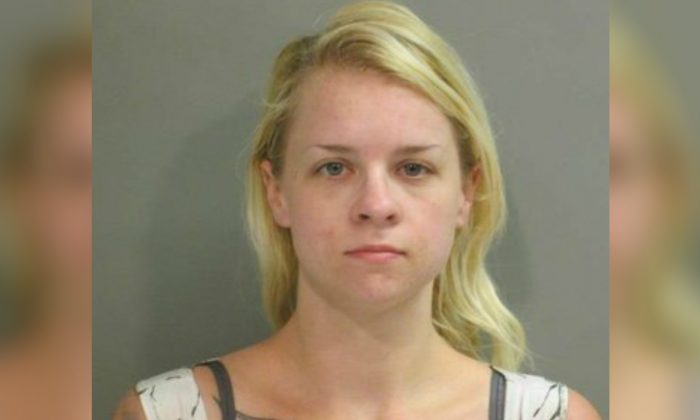 A woman who sprang her boyfriend from an Arizona jail by posing as a sheriff’s deputy will spend the next 15 years behind bars.

According to the Northwest Arkansas Gazette, Feldstein managed to free her boyfriend from a Washington County jail with nothing but a phone call and a follow-up email to which she attached an “authentic-looking form.”

The couple were arrested on July 14, 2018, according to the Gazette, and were held at the Washington County Detention Center. Feldstein made her bond the following day, after being charged with possession of a controlled substance with intent to deliver.

But her boyfriend, Nicholas Lowe, remained in jail, on hold from Ventura County Sheriff’s Office in California for false impersonation.

But Lowe had a plan.

During a jail visit, Lowe persuaded Feldstein to pose as a deputy from Ventura, according to court documents cited by KFSM.

Identifying herself as “Deputy Kershaw with the Ventura County Sheriff’s Office,” Feldstein called the jail July 27, persuading the on-duty deputy that Lowe was to be released as Ventura County jail was overcrowded.

Feldstein claimed to have sent a fax with an official release form. When the deputy said he had not received the fax, she sent him an “authentic-looking form” via email, releasing Ventura County’s hold, according to the affidavit cited by KFSM.

The plan worked—until the couple were both captured less than three weeks later in Fayetteville and found themselves once again in a county jail.

They were both charged over the escape—but Feldstein bore the brunt of the charges.

In February Lowe pleaded guilty to third-degree escape, according to local reports. He was sentenced to one year in jail, minus time served, plus a five-year suspended sentence.

Washington County deputies realized they had been duped two days after Lowe’s escape, when bone fide Ventura County deputies called to say they were coming to pick up Lowe.

According to court documents, via the Gazette, deputies reviewed video footage of a visit between the couple and saw Lowe explaining his plan to her, telling her what to say.

Lowe told her to say that Ventura County was “having issues with overcrowding and all low-priority extraditions have been suspended,” according to the affidavit, reported KEN5.

A spokeswoman for the Washington County Sheriff’s Office told the Gazette at the time that they were considering the best way to make sure this does not happen again.

“There is a procedure to ensure requests are legitimate, and that hasn’t changed,”  said the spokesperson.

According to analysis from three national databases over an 11-year period, about 3 percent of all inmates escape from prison at some time while serving their sentence.

Every year, around 1.4 percent of the correctional population escapes, according the 2005 study (pdf) for the University of New York.

However, the vast majority of escapes—88 percent—were from low-security level prisons.

“Among escapees from the more secure prisons, more than 92 percent are captured and returned to prison within a year of escaping,” according to the report.

The report notes that escape rates have dropped with the rising incarceration rate in recent decades—a decline that still continues, according to more recent reports.

The decline is attributed to improved security of new prisons, the gradual aging of the correctional population, and a drop in the number of property offenders whose skills on breaking into buildings easily convert to the skills for breaking out.