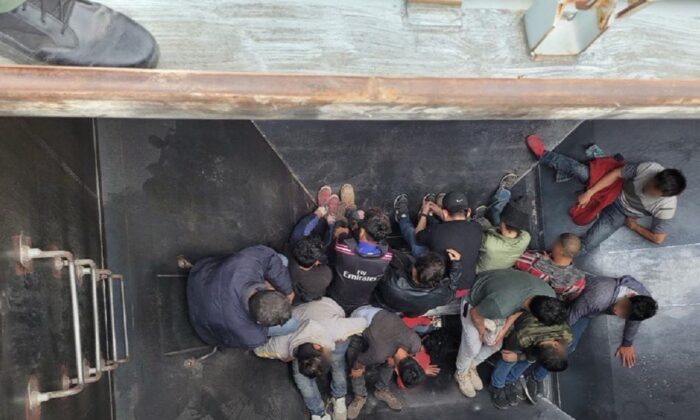 Over two dozen illegal immigrants were found in railcars in Texas near the U.S.-Mexico border, American authorities said Friday.

The immigrants were packed into three grain hoppers in Uvalde, which is west of San Antonio and roughly 30 miles from the border.

“Illegally traveling by train is dangerous and life-threatening. Our agents routinely discover migrants that have sustained severe injuries from jumping on and off moving railcars,” Austin Skero, the chief Border Patrol agent for the patrol’s Del Rio Sector, said in a statement.

Deaths have happened among immigrants being smuggled in railroad cars inside the United States, according to the Center for Immigration Studies.

“Agents discovered that the seal from the storage container’s door had been broken so the individuals could gain access and conceal themselves. The individuals used a plastic strap to hold the door closed from the inside,” the Border Patrol’s Laredo Sector said in a press release.

The apprehended individuals were determined to be in the United States illegally. They were nationals of Guatemala, Honduras, and Mexico.

The sector warned that using trains to illegally enter the United States can result in serious injury or death.

During the early months of the Biden administration, the number of illegal border crossings has skyrocketed, hitting 172,000 in March. An additional 1,000 illegal immigrants are evading capture every day.

“I would argue that it’s the biggest surge that we’ve ever seen in the history of the Border Patrol,” Brandon Judd, president of the National Border Patrol Council, told a roundtable in Texas earlier this week.

However, acting Customs and Border Protection Commissioner Troy Miller said the increase “is not new.”

“Encounters have continued to increase since April 2020, and our past experiences have helped us be better prepared for the challenges we face this year,” he said.

Apprehensions hit a low of 17,106 in April 2020 during the Trump administration, which used emergency rules to expel most immigrants because of concern they could be carrying the CCP (Chinese Communist Party) virus, which causes COVID-19.

President Joe Biden, upon entering office, rolled back or altered a number of key immigration measures, including axing the program that required asylum seekers to wait outside the country for their claims to be heard.

Charlotte Cuthbertson contributed to this report.