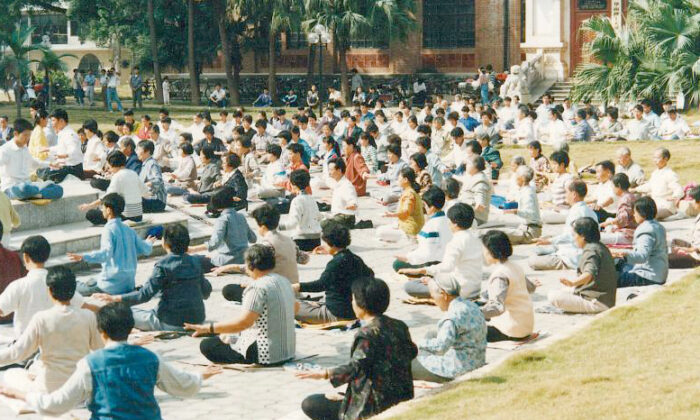 Falun Gong practitioners meditating in public in Guangzhou in 1998, before the Communist Party banned the spiritual group in 1999. Such sessions remain forbidden. Image credit: Minghui.org
Updated: 2021-06-10 15:30:10

After 22 years, the Chinese Communist Party (CCP) has not let up in its brutal persecution of Falun Gong practitioners in China.

Falun Gong, also known as Falun Dafa, is an ancient Chinese spiritual practice consisting of slow-moving meditation exercises and moral teachings based on the principles of truthfulness, compassion, and tolerance.

The practice grew rapidly in popularity in the 1990s, with 70 million to 100 million people practicing in China by the end of the decade, according to official estimates at the time. Threatened by its popularity, the CCP launched a systematic elimination campaign of the practice in July 1999. Since then, millions have been persecuted in prisons, labor camps, and other facilities, with hundreds of thousands tortured, according to the Falun Dafa Infocenter.

According to the Chinese-language Minghui.org, a U.S.-based website that documents the CCP’s persecution of Falun Gong, at least 95 Falun Gong practitioners were illegally sentenced to jail throughout May 2021, covering 41 cities in 21 provinces and other autonomous regions.

Additionally, 14 Falun Gong adherents from Suzhou city, Jiangsu province, have been missing since May 10, the Chinese-language Epoch Times reported.

They are believed to be held in a secret location—an unauthorized black jail—in Changshu, a satellite city of Suzhou.

By province, central China’s Henan and northeastern China’s Heilongjiang are the worst, with 31 and 10 jailed, respectively.

By age group, at least 13 of them are aged 65 years or older. Two of them are older than 80, including Xie Changxiu and Zheng Jiajin.

Xie, an 81-year-old woman residing in Shifang, a satellite city of Deyang city, in southwestern China’s Sichuan province, was given a two-year in jail sentence with three-years’ probation and a fine of 1,000-yuan.

Zheng Jiajin, an 81-year-old man residing in Xinxiang city, Henan province, on May 19 was illegally sentenced to nine years in prison by a court in Huixian, a satellite city of Xinxiang and fined 10,000 yuan ($1,560).

According to Minghui.org, Zheng benefited from practicing Falun Gong, recovering his health from jaundice (also known as yellows) soon after he began. He was repeatedly subjected to persecution for his continued faith in Falun Gong. Since September 2020, his pension has been suspended by Henan social insurance authorities.

By gender, a large portion of the illegally sentenced are women. Fifty-eight-year-old Wang Cuiying, a retired official from a Party school in Heze city, Shandong province, and a winner of awards for her outstanding job performance, was sentenced to five years in prison for adhering to her faith.

In 2012, she was detained for two years in a labor camp for her refusal to renounce her belief in Falun Gong, which she said had brought her back to health after her failure to cure her illnesses via modern medical means.