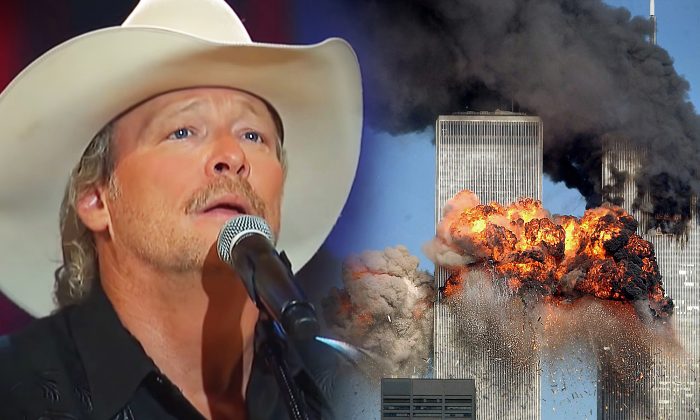 On Sept. 11, 2001, the world was shocked by the most horrific attack ever to take place on U.S. soil. Christian country singer Alan Jackson wrote a song to channel the inexplicable yet mutual trauma that many Americans felt that day. This emotional performance still touches the hearts of listeners more than a decade after the event.

On 9/11, four planes were hijacked by terrorists. Two crashed into the twin towers of the World Trade Center. One plane hit the Pentagon in Washington, and the fourth crashed in Pennsylvania. It was a horrific attack that killed nearly 3,000 people and left many times more frightened, confused, and in anguish.

It’s taken a long time for the world to make sense of it.

Two months after the event, country singer Alan Jackson released a touching piece of music that a lot of people could relate to. The song is called “Where were you (When the World Stopped Turning),” and it still resonates with many. The singer said in an interview in 2003 that he believed God helped him write the tune, and that it “just poured out,” as per Christianity Today.

Jackson stated that for him, 9/11 started like any other day when he went for a morning walk. Upon returning, he turned on his TV only to see that “[t]he first plane had already hit,” as he recalls via Christianity Today. “I was standing there when the second one hit.”

When the song debuted in November 2001, it touched many in the nation, as it expressed a shared feeling—an average morning that turned into terror.

His live performance of the song at the Grand Ole Opry in 2012 was touching. He pours into every lyric. And in spite of that performance being more than 10 years after the event, it still holds relevance in the minds and souls of the audience. The lyrics speak to an array of Americans who witnessed the devastation of 9/11, live or on TV, communicating those feelings of grief and pain.

“I’ve had so many people come up to me, and I don’t know what to say, other than that I just feel like it was a gift from God,” Alan said.

Watch the live performance from 2012:

Where were you when the world stopped turning that September day

Driving down some cold interstate

Did you feel guilty cause you’re a survivor

In a crowded room did you feel alone

Did you dust off that bible at home

Did you open your eyes and hope it never happened

Close your eyes and not go to sleep

Alan Jackson says "I will"

Go Back: Entertainment
Previous: MoviePass Shuts Down and Can’t Predict ‘If or When’ It Will Return
Next: As the Festival World Evolves, Locarno Finds Itself Through Marriage of the Mainstream and the Risky
source : www.theepochtimes.com
''