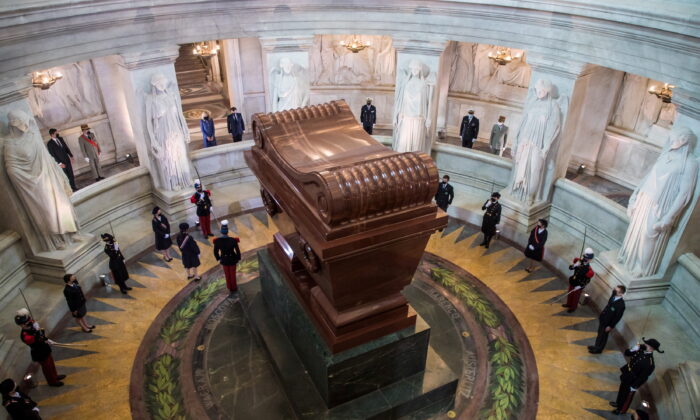 French President Emmanuel Macron and his wife Brigitte Macron stand in front of Napoleon's tomb during a ceremony to commemorate the 200th anniversary of Napoleon Bonaparte's death, at the Hotel des Invalides in Paris, France, May 5, 2021. (Christophe Petit Tesson/Reuters)
Updated: 2021-05-06 19:16:22

PARIS—President Emmanuel Macron laid a wreath at Napoleon Bonaparte’s tomb on Wednesday, commemorating the bicentenary of the death of an emperor who overthrew the nascent Republic before expanding France’s empire in bloody battles across Europe.

Numerous past presidents have shunned paying tribute to one of France’s most divisive leaders, but in a speech at the Institut de France, established by Napoleon on the banks of the river Seine, Macron said history should be confronted.

Napoleon was to some a military genius, a modernizer, and national hero. To others, he was an imperialist, warmonger, and enslaver.

The anniversary was a time for “enlightened commemoration” though not celebration, Macron said. He described Napoleon’s decision to restore slavery as a betrayal but praised a man who helped shape modern-day France.

“If his splendor resists the erosion of time, it is because his life carries in each of us an intimate echo,” Macron said. “Napoleon is a part of us.”

Napoleon seized power in a 1799 coup, overthrowing the fledgling democracy that deposed the monarchy. Battlefield victories spread his power across Europe before his defeat to the British at Waterloo.

He rolled back advances in women’s rights and reversed the abolition of slavery in France’s colonies as France and England fought for supremacy in the West Indies sugar trade.

A master administrator, he created France’s penal code as well as the administrative system of prefets and Lycee high schools that exist today.

“The life of Napoleon is an ode to political will. The path of a child from Ajaccio who became the master of Europe shows clearly that a man can change the course of history,” said Macron, France’s youngest leader since Napoleon.

The anniversary had become deeply politicized in a country that is one year out from a presidential election.

Far-right leader Marine Le Pen, Macron’s main challenger 12 months out from the vote, criticized the president for not celebrating the legacy of “an eternal French hero.”

Hard left lawmaker Alexis Corbiere previously had said there should no homage to a person “who buried the first republican experience of our history.”

Napoleon died in exile on Saint Helena in the South Atlantic Ocean at the age of 51.