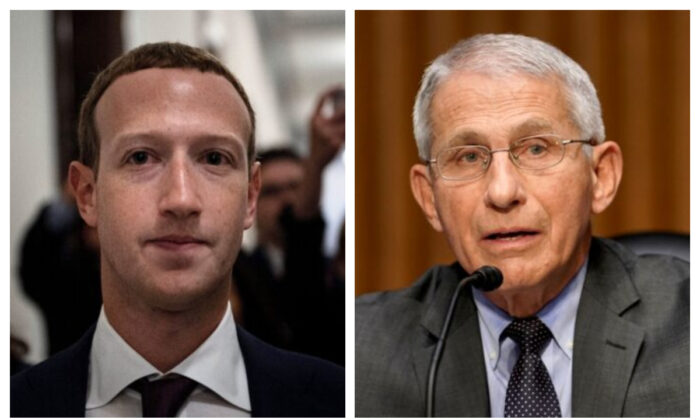 House Republicans sent a demand letter to Facebook CEO Mark Zuckerberg asking that he surrender any communications the social media giant has had with Dr. Anthony Fauci and other federal officials regarding the COVID-19 pandemic.

“In light of Facebook’s subsequent censorship of certain COVID-19 content—including content about the pandemic’s origin—these communications with Dr. Fauci raise the prospect that the federal government-induced Facebook to censor certain speech in violation of the First Amendment,” they wrote.

Over the past year in the midst of the pandemic, Facebook has moved to block content suggesting that the CCP (Chinese Communist Party) virus, also known as the novel coronavirus, may have originated from the Wuhan Institute of Virology.

Jordan’s and Comer’s letter further stipulated that Facebook hand over “all documents and communications between or among Facebook employees and U.S. government employees,” which includes Fauci, regarding the virus, treatment, and its origins. Documents regarding Facebook’s policies about COVID-19 content moderation should also be surrendered, the representatives added.

“It also appears that you shared some of Facebook’s confidential trade or commercial secrets with Dr. Fauci, as portions of your email exchange with Dr. Fauci were redacted when made publicly available,” their letter said.

Zuckerberg had sent a personal email to Fauci on March 15, 2020, where the Facebook CEO said that “this isn’t public yet, but we’re building a coronavirus information hub that we’re going to put at the top of Facebook for everyone to see” to “make sure that people can get authoritative information” and “practice social distancing.” The email also asked Fauci to do a question-and-answer session for Facebook, among other requests.

Another mid-March 2020 email, titled, “Offer from Mark Zuckerberg,” included Fauci’s response about Zuckerberg having asked him to “do videos” on the pandemic. Fauci responded by saying: “I will write or call Mark to tell him I am interested in doing this.

In recent weeks, Fauci, who has given hundreds of interviews to news outlets since the pandemic started early last year, has faced significant criticism from Republicans and former White House officials, who claimed he gave misleading information—or said he flat-out lied—about the hypotheses about the CCP virus’s origin.

“I just wanted to say a personal thank you on behalf of our staff and collaborators, for publicly standing up and stating that the scientific evidence supports a natural origin for COVID-19 from a bat-to-human spillover, not a lab release from the Wuhan Institute of Virology,” said EcoHealth Alliance’s Peter Daszak to Fauci in an email on April 19, 2020. Daszak, a staunch opponent of the theory that the virus escaped the Wuhan lab, also told the NIAID chief that “your comments are brave, and coming from your trusted voice, will help dispel the myths being spun around the virus’s origins.”

Fauci responded by saying: “Many thanks for your kind note.” According to the email trove that was published, Fauci a day before told George Gao, head of China’s CDC: “We will get through this together. Thank you for your kind note. All is well despite some crazy people in this world.”

In a series of media interviews this month, Fauci said that those emails have been “taken out of context” and defended grants worth hundreds of thousands of dollars being given to the Wuhan Institute of Virology.

“The Wuhan lab is a very large lab, to the tune of hundreds of millions if not billions of dollars—the grant that we’re talking about was $600,000 over five years,” Fauci told NewsNow last week.

But on Wednesday during an MSNBC interview, Fauci went a step further following recent criticism from GOP lawmakers, who called on him to step down from the NIAID position he’s held since 1984.

“If you’re trying to get at me as a public health official and scientist, you’re not only attacking Dr. Anthony Fauci, you’re attacking science,” he said.