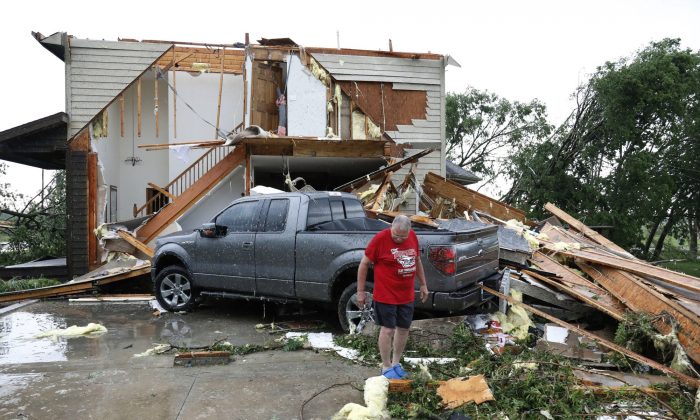 A family in northern Indiana discovered that their home was completely destroyed by the Memorial Day tornado, but was also surprised to find an unscathed Bible among the rubble.

Nancy Sander told WTHR that the house, which was located outside Macy, Indiana in Miami County, belonged to her sister who was in Florida with her family when the EF-2 tornado hit. The home has been completely ripped off its foundations and part of it was blown more than half a mile away into a nearby field.

Yesterday this was a 2 story home just outside Macy, IN. Severe storms and high winds leveled it and several other homes in Miami and Grant Counties last night. With Old Glory still flying strong, the cleanup begins. @WTHRcom pic.twitter.com/lRLYce2yC0

A barrage of tornadoes has devastated the United States over the last two weeks, caused by the volatile mixing of warm, moist air coming from the southeast. Forecasters said the storms were among 53 tornadoes that may have touched down on May 27 across eight states, including Ohio and Indiana, killing at least one person and injuring scores of others.

Sanders told the news station that if her sister’s family was in the basement, they would have been sucked out.

The house currently lies bare, reported the news station, save for a number of items such as household items, quilts, and a Holy Bible.

“The majority of household items we’re finding here, but we found her quilt in the woods over there and her red wagon in the swamp,” Sander told the news station.

Outside of the small Miami County town of Macy Indiana, this house was blown off the foundation into the surrounding fields. Fortunately the owners had just left for Florida. Their Holy Bible remains sitting next to where the house once stood. @WTHRcom pic.twitter.com/fNdeFT1unM

Response to the Storms

In Twitter posts, President Donald Trump described the storms across Ohio and other states as “very dangerous and damaging,” and noted that his administration is looking into helping those left suffering from the extreme weather.

“My team continues to update me with reports from emergency managers in the States affected. Listen to your local officials and be resilient,” Trump said in the post. “We are with you!”

Storms overnight across Ohio and many other States were very dangerous and damaging. My team continues to update me with reports from emergency managers in the States affected. Listen to your local officials and be resilient. We are with you!

Lawmakers from both parties agreed to a deal on May 23 for a $19.1 billion disaster-relief package. The agreement between the House of Representatives and Senate negotiators came after President Donald Trump said he would sign it without any border wall funding.

The Republican-led Senate approved the measure 85–8 but the measure is yet to pass in the House, reported the Washington Examiner.

The National weather service has received 934 tornado reports so far this year, up from the yearly average of 743 observed tornadoes. More than 500 of those reports came in the last 30 days. The actual number is likely lower, however, because some of the reports are likely to have come from different witnesses about the same twister.

The United States has experienced a lull in the number of tornadoes since 2012, with tornado counts tracking at or below average each year. Meteorologists still working to figure out why.

The recent surge in tornado activity over the past two weeks was driven by high pressure over the southeast and an unusually cold trough over the Rockies that forced warm, moist air into the central United States, sparking repeated severe thunderstorms and periodic tornadoes.

The Epoch Times reporter Bowen Xiao and the Associated Press contributed to this report.