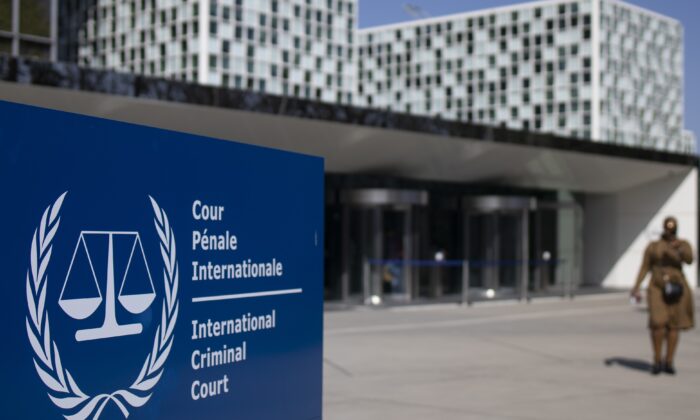 THE HAGUE, Netherlands—A group of lawyers presented a dossier of evidence Thursday to prosecutors at the International Criminal Court that they say establishes jurisdiction for the global tribunal to investigate allegations Chinese authorities are involved in grave crimes targeting Uyghurs, a largely Muslim ethnic group.

The move is the latest attempt by international human rights lawyers to get an investigation started at the Hague-based court into allegations of atrocities against Uyghurs by China, which is not a member of the court.

In a statement, the lawyers said their dossier establishes “that Uyghurs have been targeted, rounded up, forcibly disappeared and deported from Tajikistan” back into China’s western Xinjiang region “by Chinese operatives.”

They argue that “Chinese authorities have directly intervened in Tajikistan. The ICC therefore has jurisdiction over these actions which start in Tajikistan and continue into China” and urge ICC prosecutors to open an investigation “without delay.”

The filing seeks to use the legal precedent of an investigation opened by the ICC into allegations of mass deportations and persecution of Rohingya people by Myanmar forces that forced hundreds of thousands of Rohingya across the border into neighboring Bangladesh. Myanmar is not a member of the court, but Bangladesh is.

In the Rohingya case, a panel of ICC judges ruled in 2019 that the court “may exercise jurisdiction over crimes when part of the criminal conduct takes place on the territory of a State Party.”

In July last year, lawyers representing exiled Uyghur activists asked the ICC to investigate the forced repatriation of thousands of Uighurs from Cambodia and Tajikistan and alleged genocide in Xinjiang.

In a report issued in December, ICC prosecutors said that “there was no basis to proceed at this time” with an investigation into the allegations.

The lawyers who submitted the dossier Thursday say their findings are based on witness testimonies and investigations in countries including ICC member Tajikistan.

Based on their findings, the lawyers said, “it is clear that the ICC does have jurisdiction to open an investigation.”

An estimated 1 million people or more—most of them Uyghurs—have been confined in re-education camps in China’s western Xinjiang region in recent years, according to researchers. Chinese authorities have been accused of imposing forced labor, systematic forced birth control, torture, and separating children from incarcerated parents.

Beijing rejects allegations that it is committing crimes. Officials have characterized the camps, which they say are now closed, as vocational training centers to teach the Chinese language, job skills, and the law to support economic development and combat extremism. China saw a wave of Xinjiang-related terror attacks through 2016.

The Chinese Embassy in The Hague did not immediately respond to an email seeking comment on the lawyers’ dossier.

Last week, a “people’s tribunal” set up to assess whether China’s alleged rights abuses against the Uyghur people constitute genocide opened in London, with witnesses alleging that inmates at detention camps for Uyghurs were routinely humiliated, tortured, and abused.

The tribunal, made up of lawyers, academics, and business people, does not have UK government backing or any powers to sanction or punish China. Organizers hope the process of publicly laying out evidence will compel international action to tackle alleged abuses against the Uyghurs.