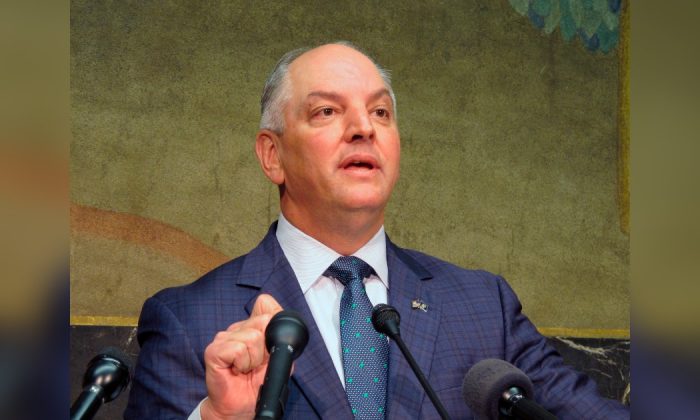 Louisiana passed a new abortion bill on May 29 that prohibits abortion once there is a detectable fetal heartbeat, which can occur as early as six weeks into pregnancy.

The bill passed the House of Representatives 79-23. Democratic Governor John Bel Edwards has indicated that he would break with his party sign it into law if it reached his desk.

“I know there are many who feel just as strongly as I do on abortion and disagree with me—and I respect their opinions,” Edwards said in a statement after the bill’s passage.

“As I prepare to sign this bill, I call on the overwhelming bipartisan majority of legislators who voted for it to join me in continuing to build a better Louisiana that cares for the least among us and provides more opportunity for everyone.”

Edwards was elected governor in 2015 and has described himself as a “pro-life candidate.”

According to the bill’s text (pdf), the prohibition will only into effect hold only if the law in neighboring Mississippi is upheld by a federal appeals court. A federal judge temporarily blocked that Mississippi law on May 24.

The Louisiana bill requires that prior to an abortion, an ultrasound is performed in order to determine whether a fetal heartbeat is present.

The bill reads: “It shall be unlawful for any person to knowingly perform an abortion with the specific intent of causing or abetting the termination of the life of an unborn human being when a fetal heartbeat has been detected.”

The ban does not include an exception for a pregnancy caused by rape or incest.

Meanwhile, Alabama has recently banned all abortions except in cases where abortion is needed to prevent a serious health risk to the mother.

None of the bans have taken effect.

The latest abortion-ban measures were aimed in part to provoke court challenges that might lead the Supreme Court to reconsider Roe v. Wade.

The Roe v. Wade Supreme Court ruling in 1973 (pdf) legalized abortion nationwide by prohibiting states from banning abortions prior to when the fetus is deemed “viable”—that is, potentially able to live outside its mother’s womb.

In Roe v. Wade, the U.S. Supreme Court said that if unborn children are persons, then they have the right to life. The decision concluded that unborn children are not persons, and acknowledged that the case to prohibit states from banning abortions would “collapse” if “the fetus is a person,” because then its “right to life would then be guaranteed” by the Constitution.

1. Lied about being raped
2. Said she was used by lawyers who simply wanted to change abortion laws
3. Sought, in 2004, to have Roe v wade overturned
4. Called her involvement in Roe the biggest mistake of her life pic.twitter.com/rGmMx2TgaE

On May 15, Alabama Gov. Kay Ivey signed a near total abortion ban into law that lawmakers said was designed specifically to challenge the 1973 Roe v. Wade ruling in the strongest way.

The Alabama law took aim at the core issue of whether an unborn child can be considered a person, as discussed in Roe v. Wade.

Rep. Terri Collins (R-Decatur), who sponsored the bill, said that if Roe v. Wade was overturned, states could then later decide what exceptions to allow—such as incest or rape.