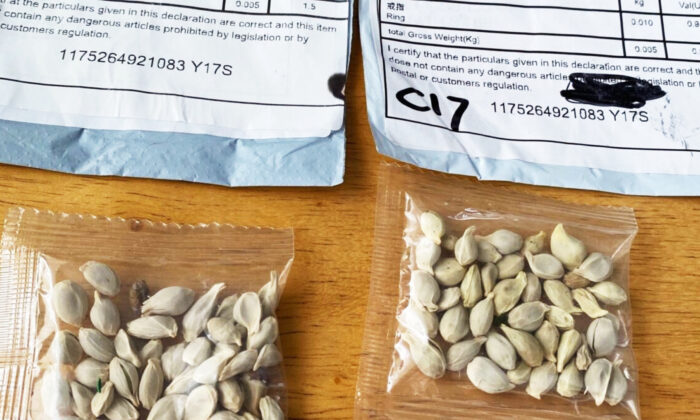 U.S. Sens. Debbie Stabenow (D-Mich.) and Gary Peters (D-Mich.), are calling for a coordinated federal effort to immediately detect unsolicited seeds and prevent them from entering the United States.

Stabenow, the Ranking Member of the Senate Committee on Agriculture, Nutrition, and Forestry, and Peters, the Ranking Member of the Senate Homeland Security and Governmental Affairs Committee, urged federal officials from U.S. Customs and Border Protection, the U.S. Postal Service, and the U.S. Department of Agriculture to coordinate their efforts to prevent any harm to U.S. food supplies and agriculture.

According to various photos shared by the state departments, people across the country have received packages that appear to have been processed by China Post, which operates the official postal service of China. Labels on the packages indicate there is jewelry inside, only to reveal clear packets of seeds.

“We are concerned that these mysterious seeds could potentially harbor foreign invasive species, plant pathogens, or insects that can pose a grave threat to our agricultural economy and the environment. It is vitally important that we prevent any harm to our food supply and agricultural economy,” the Senators wrote.

At the end of July, The U.S Department of Agriculture (USDA) announced that its Animal and Plant Health Inspection Services (APHIS) agency is working with the Department of Homeland Security’s Customs and Border Protection, other federal agencies, and state departments of agriculture, to investigate the situation.

An investigation into mysterious Chinese seed packages sent to thousands of U.S. households has identified them as 14 varieties of herbs, fruits, ornamental flowers, vegetables, and weeds, the U.S. Department of Agriculture (USDA) stated.

The known species include morning glory, cabbage, mustard, mint, sage, rosemary, lavender, hibiscus, and rose, although deputy administrator of the USDA’s Animal and Plant Health Inspection Service Osama El-Lissy noted this “is just a subset of the samples we’ve collected so far.”

“It is alarming that the seeds were able to enter the country in the first place, and we urge U.S. Customs and Border Protection, the U.S. Postal Service, and the U.S. Department of Agriculture to work together to quickly detect these unsolicited seeds and prevent them from entering the United States.”

In the letter, the lawmakers posed a host of questions to the federal officials, ranging from how many U.S. citizens have gotten these types of seeds in the mail, to if any dangerous substances been detected on the seeds, and how the various departments will work together to prevent these seed packages from entering the country. The senators want answers to the series of questions by Aug. 25.

U.S. residents have been advised to immediately report the unsolicited packages to their local agriculture departments and not dispose of or plant the seeds, over concerns that the packages containing invasive or harmful pests and weeds.

“Please hold onto the seeds and packaging, including the mailing label, until someone from your state department of agriculture or APHIS contacts you with further instructions. Do not plant seeds from unknown origins,” the USDA advised.

Go Back: US News
Previous: One Shocking Criminal Lie Is About To Cause Barrack Obama A World Of Trouble
Next: Mnuchin Says Unless Democrats Compromise, ‘There Won’t Be a Deal’
source : www.theepochtimes.com
''