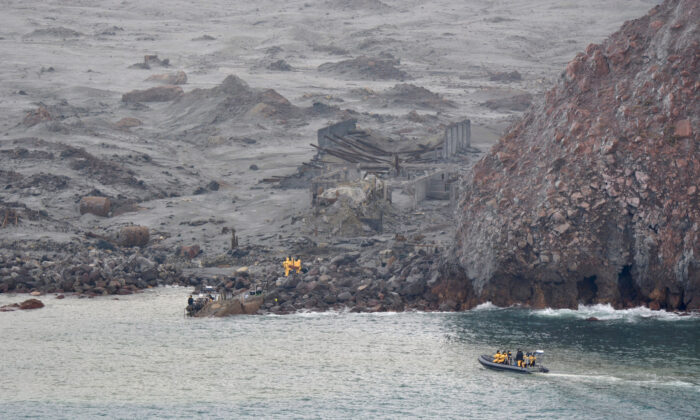 WELLINGTON—New Zealand police said on Saturday they would search in the waters near the volcanic White Island in their attempts to retrieve two remaining bodies, following a fatal eruption earlier this week.

The remains of six people were successfully retrieved on Friday after a military team in gas masks and hazmat suits went on to the volcano and removed the bodies in a high-risk operation.

Police said they could not retrieve the remains of two more people, but were able to spot at least one body in the waters not too far from the shore.

“The Police Dive Squad and Navy divers this morning resumed their search for a body seen in the water on Tuesday,” police said in a statement.

The police said they will not be returning to the island for a land-based search on Saturday, adding that they were analyzing all information available and assessing possible next steps.

“Today’s planning will allow us to return to the island to conduct further land-based searches for the remaining deceased, as the environment on and around the island allows,” police said.

“There will be no return to the island today,” it added in the statement.

The volcano, a popular tourist destination for day-trippers, erupted on Monday, Dec. 9, spewing ash, steam and gases over the island. Among the 47 people on the island at the time were Australian, U.S., German, Chinese, British and Malaysian tourists.

The death toll from the eruption is now at 14, with two bodies on the island still classified as missing.

More than two dozen people are in hospitals across New Zealand and Australia, most with severe burn injuries.

Authorities have faced growing pressure in recent days from families of some victims to recover the bodies as soon as possible.

There has also been criticism that tourists were allowed on the island at all, given the risks of an active volcano.