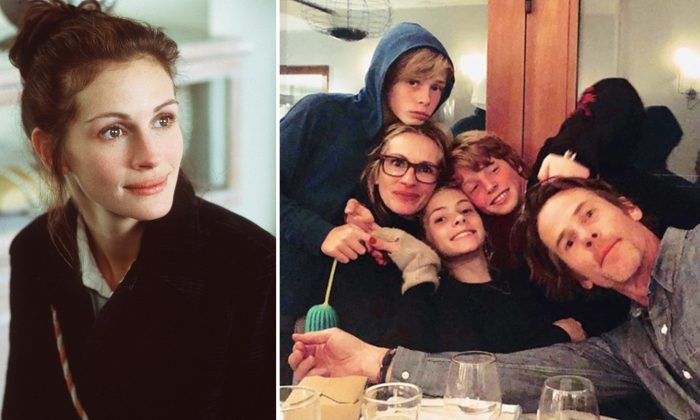 Julia Roberts is an Oscar-winning Hollywood star, yet she prefers to keep her private life exactly that: private. That includes having no social media for most of her career.

The star posted on Instagram for the very first time in June of 2018.

However, owing to her social-media-savvy husband, Daniel Moder, a few sneak peeks of life in the Roberts-Moder household have been shared with the world, and the family resemblance is uncanny.

Roberts, 51, met Moder, 50, on the set of The Mexican. Roberts starred in the movie and Moder worked as a cameraman. The couple fell head over heels in love and married in 2002 on Roberts’s ranch in Taos, New Mexico, as per Oprah Mag.

The couple had three children together: twins Hazel and Phinnaeus, 14, and Henry, 12.

Roberts, in particular, has tried to keep their children out of the spotlight, but because of Moder, a couple of rare, intimate family photographs have seen the light of day. In one sweet photo, shared on Mother’s Day of 2019, it is clear that teenager Hazel is really starting to resemble her beautiful mom.

In the touching Mother’s Day tribute posted to Instagram, Moder captioned: “That pretty mama in the middle. We love you so much.”

In another rare family shot, Moder posted a candid snap of Roberts and their three kids on Instagram, this time captioned: “No lover’s birthday weekend is complete without a surprise bumping into your kids in a surf shop. 50 is better with 5,” he added.

While family life continues with credible normality, Roberts opened up to Oprah Winfrey for Harper’s Bazaar in October of 2018, telling the TV host she thinks her kids have no idea quite how famous their mom really is.

“Do you remember when your kids finally first realized that you were Julia Roberts,” Oprah asked, “America’s beloved sweetheart actress [and] Academy Award winner?” Roberts’s response was charmingly down to earth. “I don’t think they will ever have a true sense of that,” she said.

“When they were starting to figure it out, it was like, ‘You’re famous?’” the Pretty Woman star continued, “and I said, ‘I think a lot of people might have seen the movie that I’m in, or might know who I am.’”

Perplexed, Roberts’s children mused on that information for a while before asking their mom: “Are you more famous than Taylor Swift?”

Roberts’s star has risen steadily since the young actress shot to the top of the A-list with roles in Steel Magnolias (1989), Pretty Woman (1990), My Best Friend’s Wedding (1997), and Notting Hill (1999). Roberts’s beauty has long matched her acting talent.

The actress first landed at the top of People magazine’s “Most-beautiful-people-in-the-world” list back in 1991 at the tender age of 23. Since then, she’s claimed the title a grand total of five times.

Today, the Oscar-winning actress credits her family for keeping her vibrant. “They all have a very keen sense of humor,” she told Today. “They all have a sort of different style of humor,” Roberts explained, “but I do think they are all pretty funny, and I really hope they get that from me.”

“That’s what I tell everybody!”

Indeed the family resemblance runs as deep as these rare family snaps suggest.