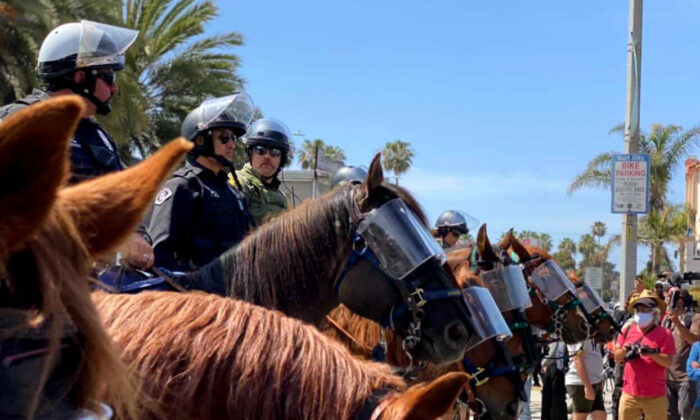 The City of Huntington Beach, California, braced for a rumored White Lives Matter (WLM) rally on April 11. Although the Huntington Beach Police Department (HBPD) was on high alert, the rally did not materialize.

Instead, the event became a Black Lives Matter (BLM) rally of some 500 people—according to a police estimate—which had been planned as a counter-protest. Scuffles ensued with local residents and the gathering was declared an unlawful assembly, with 11 arrested.

Though there was no WLM signage or chants, a handful of people did show up with signs promoting former President Donald Trump and “All Lives Matter.” And several extremists made an appearance, including two men shouting racial slurs at the BLM side and others with tattoos including swastikas.

One of them slapped a counter-protester. Photos posted on social media appear to show KKK Grand Dragon William Quigg at the event.

The WLM rally was announced through social media, but HBPD said it could not identify any specific organizer.

“Our information came solely from social media,” officer Brian Smith told reporters. “We attempted to identify an organizer or a leader or even who did the initial post, but we were unable to establish that.”

Huntington Beach Councilmember Tito Ortiz shared a post on Instagram the day before the event saying: “WARNING real patriots do not go to the HB Pier this Sunday, April 11. ‘White Lives Matter’ rally is a trap by the KKK or people pretending to be the KKK to discredit us & HB itself.”

Flyers had circulated in the city, as well as Newport Beach, in prior weeks that advertised the rally and also promoted a group called the Loyal White Knights of the Ku Klux Klan (KKK). In response,  Huntington Beach City Council passed resolutions against racism.

Within the first hour, two counter-protesters were arrested. By the time HPBD announced an unlawful assembly at 2:36 p.m. due to an unruly crowd, eleven people total had been arrested, Smith told The Epoch Times via email.

“After the order was given, the crowd dispersed, effectively ending the event,” Smith said via email.

The crowds had chanted “Nazis go home,” “No KKK, No Fascist U.S.A,” “What Do We Want?…Unity,” as well as a chant directing profanities at police.

The handful of people holding Trump and an All Lives Matter flag were accosted by counter-protesters.

Dozens of HBPD officers were present, some on horseback, others holding batons. A number of SWAT agents and Anaheim Police Department officers were also monitoring the streets.