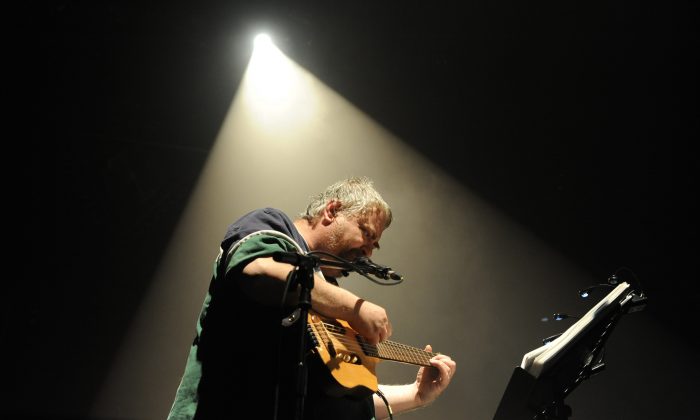 The singer-songwriter Daniel Johnston passed away at the age of 58 on Sept. 11, according to multiple reports.

Dick Johnston, Daniel Johnston’s brother, wrote on his Facebook regarding his brother’s death and confirmed that his brother died of “natural causes” in his home, which was located near Houston, Texas. In the post, Dick Johnston said that the singer-songwriter had been visiting the hospital frequently during the six months before his passing.

“He had been in and out of the hospital for the past six months with kidney-related issues. His ankles would swell up, and it would affect his mental state,” he wrote. After a recent visit to the hospital, Dick Johnston wrote that his brother had just come from the hospital, and everything was normal.

“He had just come home and was doing great, his ankles looked completely normal,” Dick Johnston wrote. In an interview with Rolling Stone, Dick Johnston said his brother was in good spirits.

“He was lucid and in good spirits—as good as I’ve seen him in years. The [ankle] swelling was down, and the problem looked good. He was happy to be home,” Dick Johnston said.

According to Rolling Stone, Daniel Johnston was hospitalized the week before and returned home on Sept. 10. However, on the day, he returned home, a caretaker came to check on him around 8:30 p.m. The caretaker said that Johnson did not wish to see him.

“We found him the next morning. They ruled it ‘natural causes’ without an autopsy, but speculated it was a heart attack,” he wrote. “I think it happened very suddenly since he fell from a standing position. But, from the position of his arms, he probably wasn’t conscious when he hit the ground.”

Dick Johnston also released a statement on the day his brother died through a Facebook post. It was initially posted on the Hi How Are You Project Facebook Page, which is a non-profit organization that promoted conversations about mental health issues. It was created with help with the support of Daniel Johnston and his family.

“Daniel was a singer, songwriter, an artist, and a friend to all,” the statement read. “He inspired countless fans, artists, and songwriters with his message that no matter how dark the day that ‘the sun shines down on me’ and ‘true love will find out in the end.'”

Dick Johnston said that his brother had suffered through mental health issues throughout his adult life. Rolling Stone reported that Daniel Johnston was diagnosed with schizophrenia and bipolar disorder. However, through producing art and music, he was able to overcome his illness.

“I always wanted Danny to feel like his own person, and in control of his own life. Since the beginning to work and travel with him in about 2003, we gratefully were able to travel the entire globe for over a decade to get out before the fans,” Dick Johnston said. “He was always, everywhere, warmly received and he at least knew he was well-loved. Health issues have plagued us for years, but I’m glad for the time we had.”

“Keeping him healthy has been the struggled, and when he’s not well, you deal with a different person,” Dick Johnston said in an interview with the media outlet.

Tom Gimbel, Johnston’s manager for well over 25 years, on news of Johnston’s death said; “It has been the greatest honor and privilege of my professional life to work with Daniel Johnston—someone who I consider to be one of the greatest songwriting geniuses of our time. In our time together, Daniel was more than an artist; he was family. I will miss him greatly but will smile every time I hear his songs.”

Kurt Cobain, who was a fan of Daniel Johnston, and said that he viewed Johnston as one of the greatest songwriters, Rolling Stone reported.

Daniel Johnston was known for his songs on life and love, and wrote and performed the songs, “Live in Vain,” “True Love Will Find You in the End,” and “Walking the Cow” in particular, according to Rolling Stone. His songs have inspired many artists that came after. Many artists did covers of his songs as well. Artists like Flaming Lips, Death Cab for Cutie, Bright Eyes, and Beck have covered his songs.