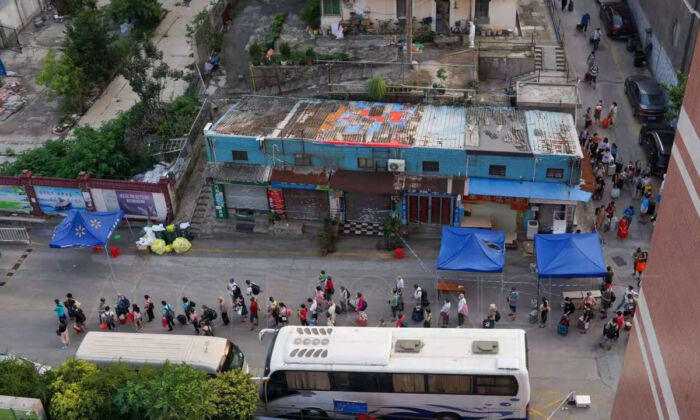 Heyuan residents in 12 buildings were forced to move to a hotel for centralized quarantine in Liwan district, Guangzhou, on the night of June 7. (Provided to The Epoch Times)
Updated: 2021-06-10 17:10:13

Armed forces are stationed around the area of Guangzhou hardest hit by a recent COVID-19 outbreak, as the number of daily infections remains high in the southern commercial city, a night shift guard told The Epoch Times.

“The troops are patrolling everywhere during the day. This is their main battlefield in the daytime, and during the night, it is ours,” he said.

On June 10, Guangzhou authorities reported six locally acquired infections since the day before.

One case was a male patient, 53, living in Heyuan community on Baihedong subdistrict—one of two high-risk areas.

Liu Hua, one security guard in the 1,000 brought in to supervise the Heyuan community, said that besides closed roads, restaurants, and entertainment venues, local authorities have also set up 24-hour checkpoints and stationed the military nearby.

“We came over immediately on the day of May 31,” he said.

Liu is on duty from 8 p.m. till 8 a.m. in a protective suit every day. Outside of work hours, he has to stay in a classroom at the Guangdong Experimental High School Liwan Campus with a dozen of his colleagues.

The security guards were joined by armed forces, he added, as more than 2,000 soldiers were stationed at an experimental primary school in Liwan district.

“Some people can’t sleep at night and will run out [of their home], asking questions and yelling,” Liu said.

On the night of June 7, Heyuan residents in 12 buildings were forced to move to a hotel for centralized quarantine, after the community recorded nine new confirmed cases, Chinese state media reported.

“There is no food.” “It’s really going to kill people,” a number of occupants shouted from upstairs, as recorded by the video.

“We’ve been waiting for two days and two nights. Please get someone to send us something to eat,” an elderly man called out.

One community security guard told the Chinese-language Epoch Times that the depressed man had been isolated for too long, and he was hoping to raise public awareness.

A netizen wrote on Weibo, China’s equivalent of Twitter, that the incident was allegedly due to the difficulty the elderly generation has to shop online with their mobile phones.

In the afternoon of June 8, local authorities reported that Wen Guohui, the mayor of Guangzhou, and Sun Yang, the deputy director of China’s Emergency Office of the National Health Commission, visited the Heyuan community.

Zhang Shun (Pseudonym), a citizen of Liwan, said: “I bought eggs for $13 a kilogram, but was told that I had earned a bargain.” The local market price for pork belly rose six times higher than usual, according to Zhang.

He learned that many residents were laborers from other cities, who didn’t have refrigerators at home to store fresh food supplies. “They have no voice. The community can’t even hear them,” he said.