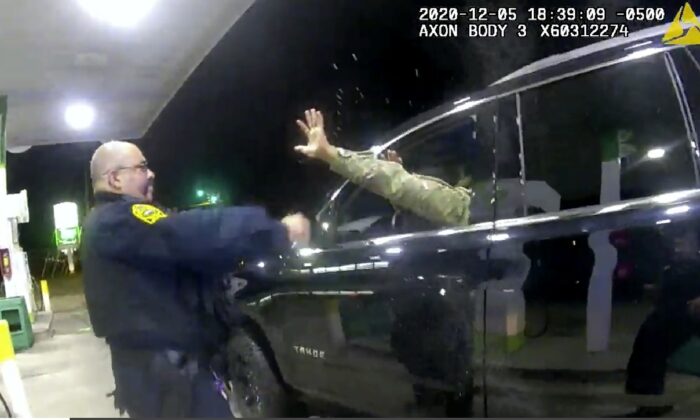 A police officer uses a spray agent on Caron Nazario on Dec. 20, 2020, in Windsor, Va. Nazario, a second lieutenant in the U.S. Army, is suing two Virginia police officers over a traffic stop during which he says the officers drew their guns and pointed them at him as he was dressed in uniform. (Windsor Police via AP)
Updated: 2021-04-12 06:50:02

A Virginia police officer who pepper-sprayed an army officer during a traffic stop last year has been fired, the Windsor Police Department announced on April 11.

Joe Gutierrez was one of the officers seen threatening Lt. Caron Nazario at gunpoint during the traffic stop at a gas station on Dec. 5, 2020. The incident first drew attention after Nazario sued the two officers, alleging that they had acted in a discriminatory manner and violated his constitutional rights.

“[C]ameras captured footage of behavior consistent with a disgusting nationwide trend of law enforcement officers, who, believing they can operate with complete impunity, engage in unprofessional, discourteous, racially biased, dangerous and sometimes deadly abuses of authority,” the lawsuit said.

Body camera footage of the incident obtained by The Associated Press shows Nazario, who is Black and Latino, dressed in his uniform holding his hands up as the two officers with their guns drawn demanded he got out of his car.

Nazario did not immediately comply, telling the officers that he was “honestly afraid to get out.” One of the officers could be heard saying, “Yeah, you should be! Get out! Get out!”

At one point, Gutierrez was seen spraying Nazario, who was still sitting in his car with his hands up, with pepper spray multiple times at close range before ordering Nazario again to “get out of the car.” Nazario eventually complied.

Nazario could be heard asking the police officers to explain “what was going on,” as the two officers tried to force the army officer to the ground.

When Nazario asked for a supervisor, Gutierrez delivered “knee-strikes” to the lieutenant’s legs, knocking him to the ground, the lawsuit said. It also described how Gutierrez had told Nazario he was “fixin’ to ride the lightning,” a reference to the electric chair which was also a line from the movie “The Green Mile,” a film about a Black man facing execution.

“The pursuit and ultimate stop resulted in the use of pepper spray against Lt. Nazario by Officer Gutierrez,” Windsor Police Department said in a statement.

The department said it had conducted an internal investigation to determine the appropriateness of the actions and determined that the officers had not followed police department policy.

“This resulted in disciplinary action, and department-wide requirements for additional training were implemented beginning in January and continue up to the present. Since that time, Officer Gutierrez was also terminated from his employment,” the statement said.

The Town of Windsor has requested the Virginia State Police to conduct an independent investigation.

The Associated Press reported that during the incident the officer, Daniel Crocker, who initially encountered Nazario radioed that he was attempting to stop a vehicle with no rear license plate and tinted windows. He said that he believed the driver was a “high-risk traffic stop” because he was “eluding police.”

Nazario’s attorney Jonathan Arthur told the news wire on April 9 that Nazario was not trying to elude the officer but was searching for a well-lit area “for officer safety and out of respect for the officers.”

Gutierrez, who was driving by, heard Crocker’s call and decided to join the traffic stop.

Virginia Gov. Ralph Northam (D) said on April 11 that he was ordering the Virginia State Police to conduct an independent investigation on the December traffic stop.

“The incident in Windsor is disturbing and angered me—and I am directing the Virginia State Police to conduct an independent investigation,” Northam wrote in a statement.

Arthur had also told AP that Nazario, who graduated from Virginia State University, had been commissioned out of their Reserve Officer Training Corps program, and was returning home that day. He said Nazario was “not doing too well” after the incident.

Follow Janita on Twitter: @janitakan
Go Back: US News
Previous: Protesters Clash With Police After Deadly Officer-Involved Shooting of 20-Year-Old Daunte Wright
Next: Lawmakers Call for End to CCP’s Influence on US Education
source : www.theepochtimes.com
''