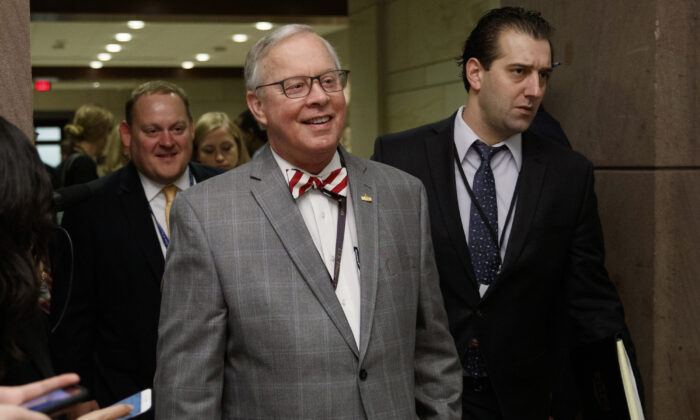 Susan Wright, the widow of Rep. Ron Wright (R-Texas), the first sitting Congressman to die due to COVID-19 complications, announced Wednesday that she will run to fill the seat left vacant by his death.

“Ron always fought for the people and conservative values of the 6th District,” Susan Wright said in a statement, noting that he was a “staunch defender of President Trump and his America-First agenda.”

“I’m asking the voters of Ellis, Navarro, and Tarrant Counties to help me continue the fight for stronger borders, lower taxes, and the precious right to life in Washington,” she added.

Following a years-long battle with cancer, Ron Wright died on Feb. 7, after testing positive for COVID-19 in January, his office said in a statement.

“Despite years of painful, sometimes debilitating treatment for cancer, Ron never lacked the desire to get up and go to work, to motivate those around him, or to offer fatherly advice,” his office said.

“Ron remained stoic in the face of his health challenges and incredibly upbeat about the future of the state and the nation he loved so much,” his office added.

His death triggers a special election in the 6th Congressional District, which Texas Gov. Gregg Abbott has set for May 1.

In launching her bid, Susan Wright vowed to continue her late husband’s legacy, vowing to focus on issues important to Texans, including cutting taxes and wasteful spending, defending Constitutional freedoms, and strengthening the military.

She also touted her experience as a member of the State Republican Executive Committee and as district director for two Texas state lawmakers.

“The taxpayers of the 6th District deserve a proven conservative in Congress who will stand up for them and do whatever it takes to stop the radical left’s socialist government takeover,” she said in the statement. “I’m running for Congress to continue my husband’s legacy by supporting economic growth, reforming our broken health care system, and defending Texas conservative values.”

On Tuesday, former Democratic candidate for Texas state representative, Lydia Bean, also announced her candidacy in the May 1 special election.

Bean, who lost her bid for a seat in the Nov. 3 election, said in a statement announcing her run, “North Texas is in crisis. From our crumbling infrastructure to the raging pandemic, we need new leaders in Congress who will tackle these challenges.”

Bean holds a Ph.D. in Sociology from Harvard University and taught at Baylor University.

“Once we re-establish our commitment to a free and fair democracy for all, Congress can come together and solve the problems that are facing every Texan: building back our economy from the ground up by repairing our crumbling infrastructure, getting North Texas reopened as quickly and safely as possible, and ensuring that after COVID-19, every Texan has a fair shot to succeed,” she said in a statement on her campaign website.

Texas’ 6th District sits in Tarrant County outside of Dallas.