Woman Interrupts Michael Bublé at Concert, He Can’t Believe Who She Calls Over 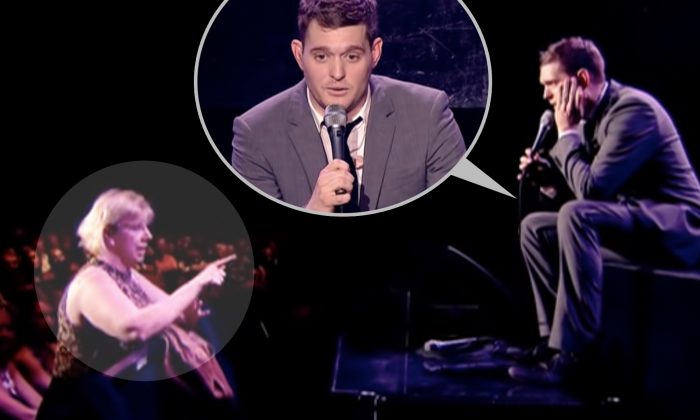 Canadian singer-songwriter Michael Bublé has dulcet tones reminiscent of the good old days. Bublé found a worldwide audience in 2005 with his album It’s Time, and since then the jazz singer has gone from strength to strength, winning four Grammy awards and even becoming a husband and father in the process.

But did you know that Michael Bublé is also a really, really nice guy?

Bublé’s predecessors (we’re thinking crooners of the past like Bing Crosby, Frank Sinatra, and Elvis Presley) put on a fantastic show but weren’t always too actively engaged with their audiences. Bublé, on the other hand, often chats with his fans in between songs.

So much so that on one occasion a slightly overenthusiastic mom approached the stage and asked the singer for something a little more than an autograph, a shout-out, or a photo. She asked Bublé if he would invite her son up onto the stage to sing.

Many artists would have their feathers ruffled by a member of the audience interrupting the flow of their set. So many gigs these days are so carefully orchestrated that there’s no room for contingency. But for Bublé, it’s all part of the fun. This amazing clip was filmed during a concert in Birmingham, England, and was shared as part of Bublé’s 2010 television documentary This is Michael Bublé.

“My son turned 15 two days ago,” the mom begins. “He’s sitting over there,” she continues, pointing behind her to where her mortified son is hiding in the stalls. “He sings really good,” she says, “and he’d like to sing with you. Could you ask him, please?”

Won BCMA Radio Artist of the year. ThankYou for all the brill support. Congrats to all the nominees. Awesome night pic.twitter.com/45Z1cObSxy

Bublé is clearly taken aback by the mom’s persistent questioning, even calling her a “crazy woman” in jest, but after a few seconds of deliberation, he makes his decision. “You know what? Because we’ve taken it this far already,” he says, “come up here for a moment.” Bublé gestures toward the young boy and gets him up onto the stage.

The band starts an instrumental rendition of Feeling Good, and a very nervous Sam Hollyman takes a seat beside his idol. Bublé sings the first line, then tentatively passes the microphone to 15-year-old Sam, bracing himself for a few dodgy notes. But what happens next propels Bublé to his feet in shock and sheer delight.

“Sam can sing!” Bublé shrieks out into the audience with a huge grin on his face, before lifting the shy teen off his feet. “Yes!” the singer rejoices. He gives the microphone to Sam, who completes the next few lines of the song immaculately before the pair end the verse together. By now, the audience is wild.

Here’s to a great 2016 . Hope you’ve had a brill New Year. pic.twitter.com/pHvoZ6YkJC

“Ladies and gentlemen,” Bublé exclaims, “15-year-old killer, Sam!” The video has almost 24 million views on YouTube for a reason; it’s impossible not to love a star who gets this excited about the hidden talents of his fans!

As for Sam, he has continued singing and keeps folks updated on his performance dates via his Twitter account. What an amazing story, Sam. We hope you’re “feeling good” for a very long time to come!